Ocean Mage Summoners is one of the best and most popular comps in Patch 9.23. The comp is strong for good reason: it smoothly transitions from early to mid to late game, many units are cheap and easy to get, the 4 Ocean synergy is busted, it abuses the OP Summoner trait, and it's incredibly efficient with respect to trait combinations. 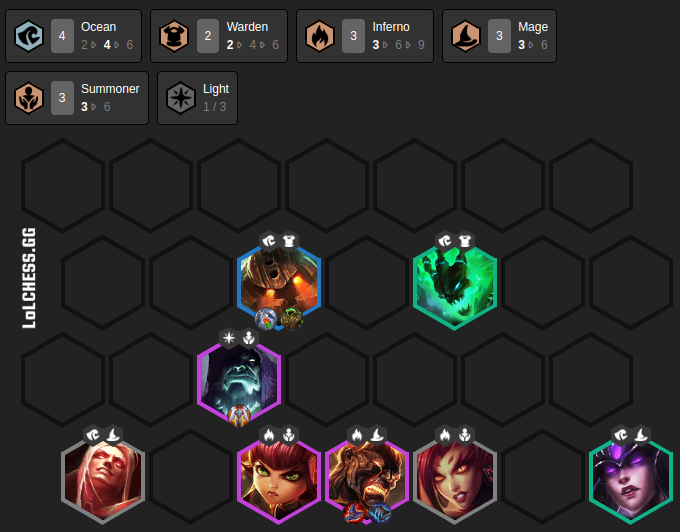 I have consistently forced this comp to climb from Bronze to high Gold (~top 500 at this time since the ladder has been reset). I've created an in-depth guide for this comp based on my experience playing it. 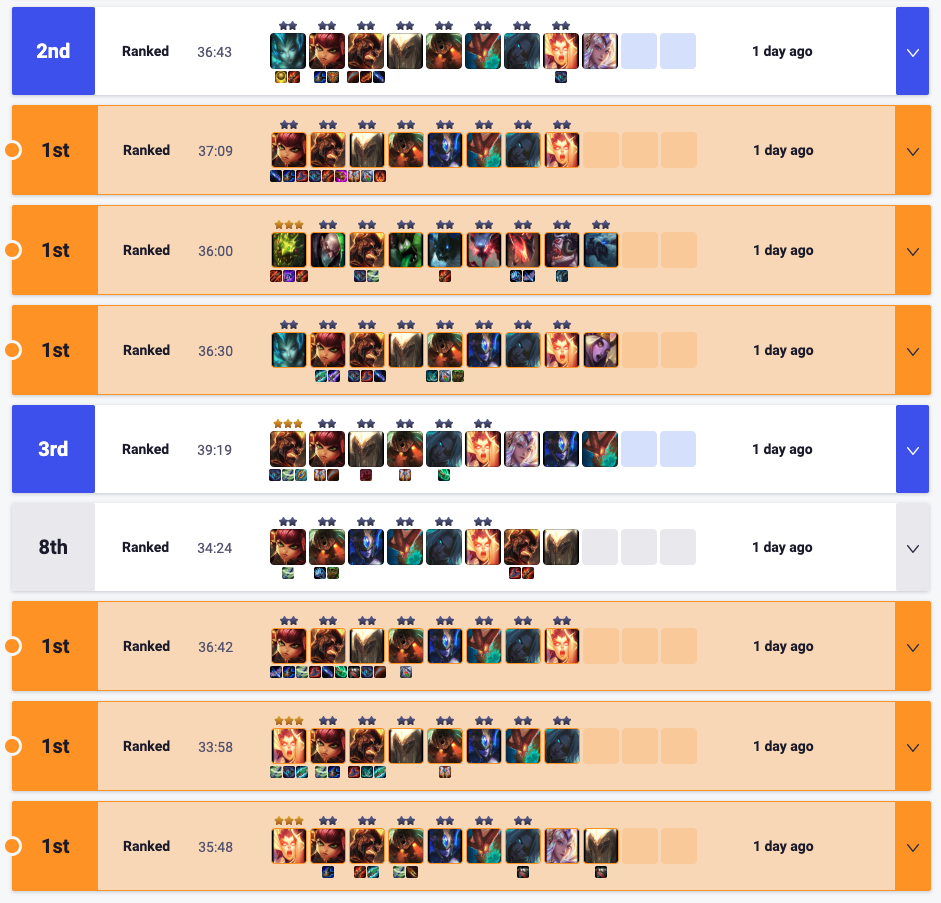 In the early game you want to be looking for these units: Vlad, Syndra, Zyra, Varus, Thresh, Nautilus, Diana, Kindred, and Malzahar. Although Diana, Varus, Kindred, and Malzahar are not part of the final comp, they are either good item carriers or transition units before you get the comp's expensive and contested carries (Yorick, Annie, or Brand).

Diana, Varus, and Kindred are each good item carriers for Brand, and they enable you to activate the Infernal trait early on. Diana should only be relied on until about mid-stage 3, in which case you should be leaning into Varus and Kindred, or Brand if you get lucky. Varus and Kindred synergize very well with each other since they're both Infernal Rangers.

Malzahar is a strong Summoner that enables you to activate the Summoner trait early. You can think of Malzahar as a powerful transition unit that is replaced by Yorick later on. Malzahar synergies well with Kindred since they both have the Shadow trait.

Another path you can go in the early game is getting Woodlands and Druids. Keep them until mid-stage 3 while collecting your comp's core units.

In the mid game, you're looking for your high value carries (Brand, Annie, Yorick). Try to save to level at 3-2, 4-1, and 5-1. After leveling at 4-1, you should immediately roll down for these carries. Avoid rolling to zero though, try to stay above 10 or even 20 gold. In late stage 3, you can roll a little bit if you feel like you're weak (e.g. many level 1 units). Again, when you roll for units, never roll below 10 gold. It's doomed if your econ falls that low early on.

In the mid-game, it's all about being as strong as possible without destroying your econ. Most games are won or lost based on the mid game. Don't be greedy with your items, especially if you feel like you're weak but you need to save for the next level up point. A suboptimal item can save you lots of HP and make the difference between a top 4 and a bottom 4.

Your mid game comp can vary based on the high value carries you get. If you hit Brand or Annie early, consider teching in 3 Mages and 3 Infernals. You should always prioritize 4 Oceans, which many consider to be broken. If you don't have Brand or Annie, or are hesitant to bring them in while they're only level 1, keep your level 2 Kindred and Varus (actually Varus can be easily replaced by a Brand 1 or Annie 1). A level 2 Kindred can carry you throughout stage 4 and maybe even early stage 5.

The carries you should consider stacking in the mid game are: Zyra, Kindred, Varus, or Malzahar. 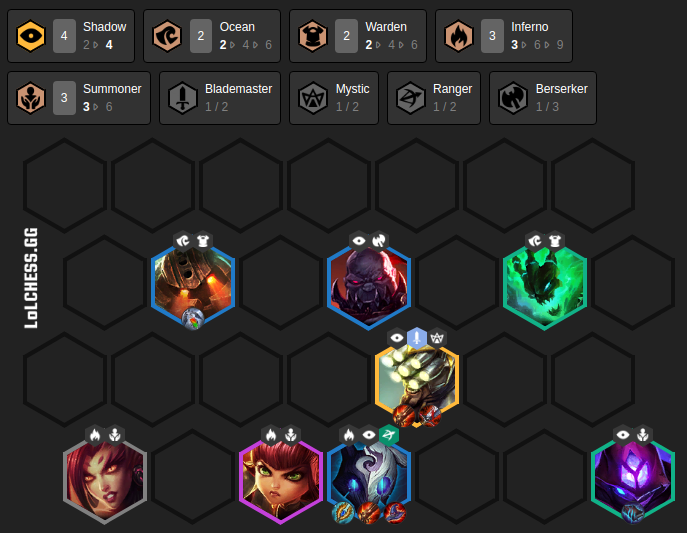 When you enter the late game, you have an important choice. Do you stay at level 7 and roll to level up your units, or invest 1000000 gold to get to level 8 and complete your synergies? Only pick the first option if you feel super weak or don't have enough gold, and have resorted to optimize for a 4th, 5th or even 6th finish. Otherwise, going for level 8 allows you to aim for a top 3 finish.

If you choose to stay at level 7, try to keep rolling every round (but stay above 10 or 20 gold) until you have level 2 carries. Do whatever you can to be as strong as possible. Consider even specifically countering other weak players in the lobby (e.g. a weak assasin player means building PD) so that you can knock them out if you face them.

If you choose to get to level 8, then you can start looking for powerful late game units to cap out your comp. An example would be dropping Thresh and adding in a Nami. If you feel exceptionally strong, consider saving for level 9 and putting in Mystics (Nami for Thresh, with Janna as your 9th unit). Alternatively, you can also put in an Ocean Lux at level 9 for 6 Oceans or, if you have the Warden's Mail, you can get 4 Wardens. Go for Mystics if other strong players are running Mages or Wardens if they're running attack damage comps. If the lobby is magic damage heavy, you can even tech in Mystics early at level 8 and dropping either Summoners (bye bye Yorick) or 4 Oceans (bye bye Thresh). It's better to drop Summoners over 4 Oceans in my opinion.

Another note, the most powerful version of this comp is arguably one with a Zed 2 (replaces Yorick) that has busted items like GA, Warmog's, Redemption, or Ionic Spark.

Finally, also start looking to 3-star your Brand, Annie, or Yorick if you're rich and strong. It's much easier to get 3-star 4-cost units this patch, especially when other players start getting knocked out.

In my opinion, the best items to prioritize early on are: Spatula, Rod, Tear, Bow, and Belt.