Predators form the core of some of the best comps of this patch. The comp has a few variations but generally relies on tanky 3-star Predators that kill the opponent's units quickly with executes, as well as the powerful Poison trait. 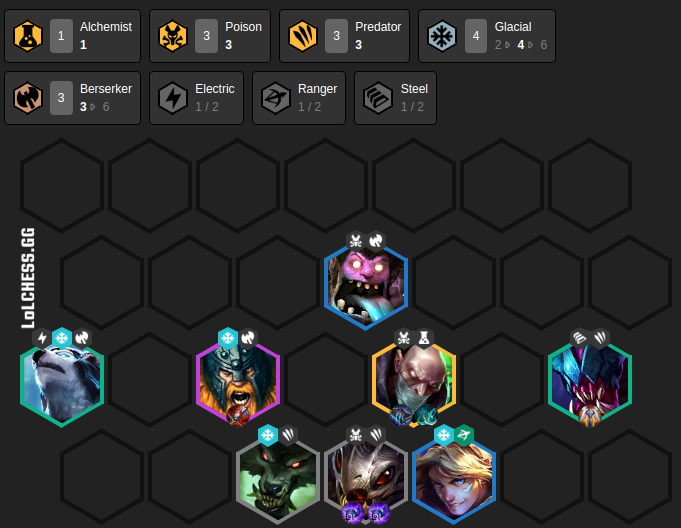 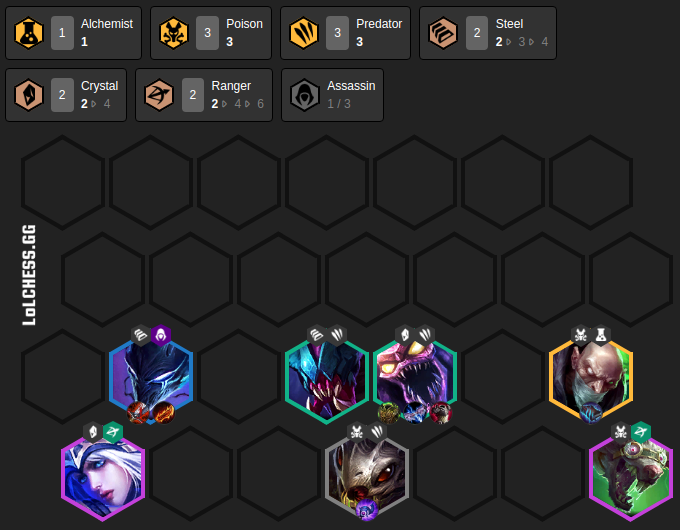 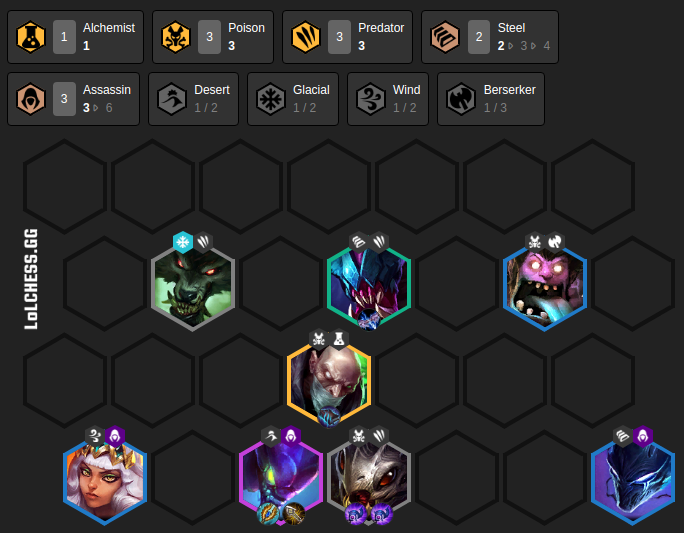 Choosing when to commit to Predators

You should only try to go for a Predator comp if you find Predator units at the start of the game (stage 1 / 2). An example of a strong Predator start is having a 2-star Kog'Maw coming out of stage 1 and possibly having a few Warwicks / Rek'Sais / Skarners.

As you go through stage 2, scout to make sure that there aren't too many other Predator players. If there are more than 2, you might want to pivot. Scouting is really important in stage 2... you don't want to commit to a Predator comp when you're competing for the same units with 3 or more players.

Should you Hyperroll? Which variant should you go?

Assuming that you've decided to commit to Predators, there are two ways to play your early game. You can either save up gold to hyperroll for Kog'Maw / Warwick / Skarner / Rek'Sai at stage 3-1 (right after Krugs), or you can chooose not to hyperroll and level up to rush for the Poison buff / Olaf / Kha'Zix / Ashe.

If you pick the hyperroll option, don't press the level up button and save up as much gold as possible (without losing to Krugs) and roll at stage 3-1 since you naturally level up at stage 3-2. A lower level increases your chances of finding Kog'Maw. When rolling, don't roll down to 0 gold unless you absolutely have to. Make sure to have at least 10 gold left.

You don't hyperroll if you're low on gold, you don't feel like you're close to a 3-star unit, or there's another Predator player that is ahead of you in getting units. I personally like the non-hyperroll version of Predators as it's more consistent and getting the Poison buff or a 2-star 4-cost unit earlier is strong.

Like any other comp, your goal early game is to not take too much damage. You want the strongest comp early to stay healthy. For Predators, you could lean into Druids and Woodlands early (always very strong) or you can have a Predator setup (Kog'Maw, Rek'Sai, Warwick, Skarner) with random units tacked on. In the example below, I added Voli and Orn for electric. 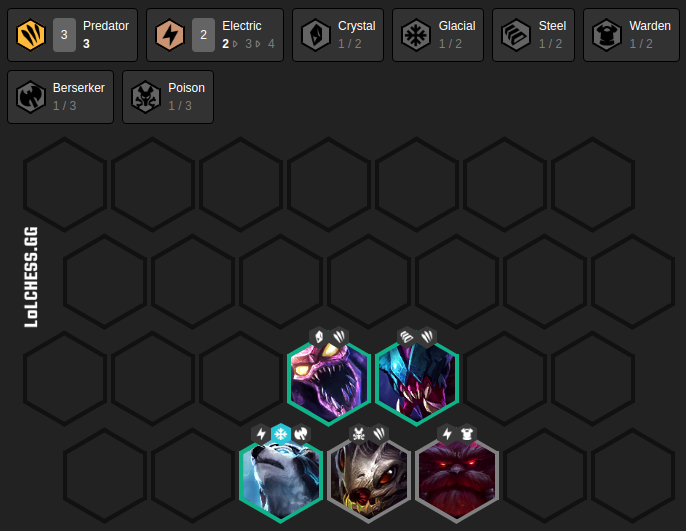 Units to look for in the mid game

In the mid game, you're slowly trying to 3-star your Predators if you haven't already. Don't commit to 3-starring too many units. Try to get Kog'Maw, Warwick, and a 2-cost Predator (Rek'Sai or Skarner) 3-starred.

Add in Nocturne for the Steel buff to increase the tankiness of your frontline (if you're running Rek'Sai), or add in Ashe for the Crystal buff (if you're commiting to the Crystal comp variant).

When you're running Crystal, try to 3-star Skarner and place a few key items on him: Thornmail, Ionic Spark, and a defensive item (e.g. Warmog's or Dragon's Claw). A super tanky Skarner is one of the key units that make Crystal strong.

Singed is an absolutely insane unit. Buy him and drop him in your comp whenever you get the chance.

If you're going for the Sins comp variant, you want to prioritize finding a Qiyana for the mid game. She's super strong and can carry you through the mid game.

Go for these units in the mid game if you're running the Crystal comp variant. Not shown are Predator units, which you should try to 3-star if possible. For Crystal, you really want to 3-star Skarner.

Go for these units in the mid game if you're running the Sins comp variant. Not shown are Predator units, which you should try to 3-star if possible.

Go for these units in the mid game if you're running the Berzerkers comp variant. Not shown are Predator units, which you should try to 3-star if possible.

For Predators, you play the mid game in the "standard" fashion, i.e. you should level up after PvE rounds and roll when you feel weak compared to the lobby.

A perk about Predator comps is that you need relatively uncontested 4-cost units (Olaf or Kha'Zix or Ashe or Twitch). This gives you the option to roll later than everyone else when they've thinned out the champion pool and it's more likely for you to find your 4-cost units. For example, instead of rolling at stage 4-1 or 5-1, roll at stage 4-2 or 5-2.

When you enter the late game, you need to choose between staying at level 7 and rolling to upgrade your units or leveling 8. Most Predator comp variants round out their synergies at level 7, which is great. Leveling to 8 does increase your chances of finding Singed but don't bet on it; Singed is a rare 5-cost unit and he's also highly contested.

The comp's late game power spike comes when you get a Singed 2. Singed 2 is an absolute monster.

The Predator comps are not super item dependent. You often make a decision to go for Predators based on the units you get early, not the items you get early.

That said, there are definitely items that are more optimal in the comp.