With the nerfs to the 4 Ocean synergy bonus and Brand in patch 9.24, Ocean Mage comps have sunk in popularity. This gives way for other comps, like Berzerkers, to shine. Berzerkers were basically unplayed during patch 9.23 but have risen in popularity in patch 9.24 and is seeing a lot of play and success in high elo games. This is a guide to winning with Berzerkers. 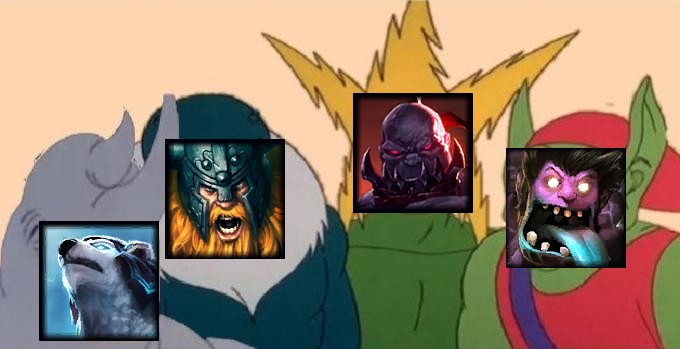 Berzerker comps rely on 6 beefy Berzerkers running over the frontline of enemy comps before easily cleaning up the back line. There are two variants to the Berzerkers comp: one that runs Poison and one that runs Electric. If you're level 9, you can have both. Berzerkers are stronger this patch because of the buff to Electric (Damage: 70/250/500 ⇒ 100/300/500), the buff to the 6 Berzerker synergy bonus (+25 damage to every Berzerker), and the popularity of the Blender and Summoner Sins comps (countered by Berzerkers). 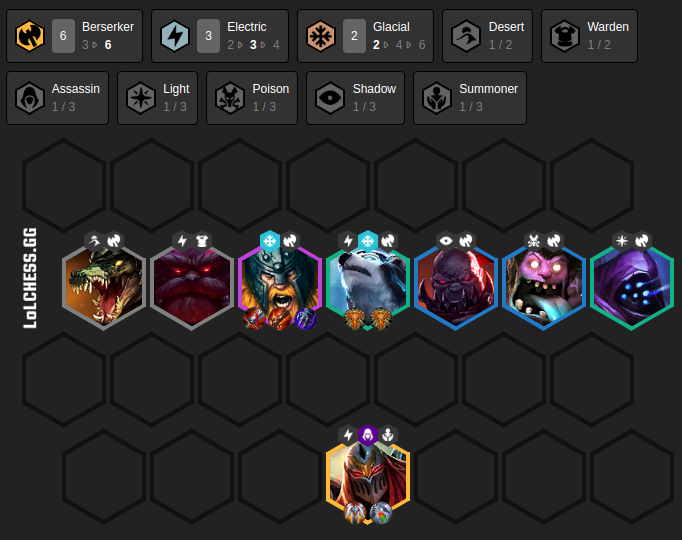 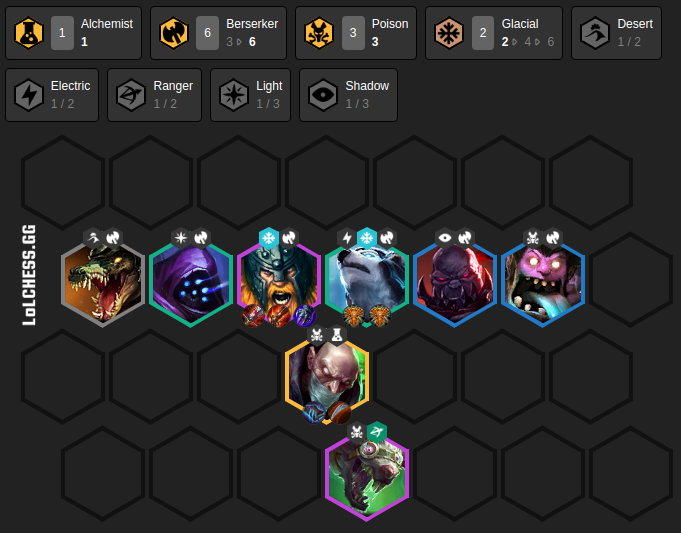 Choosing when to commit to Berzerkers

It always helps to scout the lobby before committing to Berzerkers. You don't want to run Berzerkers in a lobby where more than 1 other player is going for Berzerkers. If you do, the whole game is going to be a gamble for Olaf 2 and it won't be fun, especially if you drew the short stick. On the flip side, if you see multiple players going for the Blender comp, consider going for Berzerkers to teach them a lesson.

The common principle in the early game is to be as strong as possible with minimal gold commited. However, you also want to balance this with having units that make it easy to transition to your mid / end game.

Other early game units you can consider are Renekton, Braum, Vayne, and Nasus. Renekton is a cheap (1-cost) Berzerker that is part of your final comp and Braum synergizes well with Orn and Volibear (Warden and Glacial). Vayne and Nasus are good units to hold your Olaf items.

If all else fails, running Woodlands and Druids is not bad... or you can just run strong 1-cost units like Zyra, Vlad, and Taliyah. Taliyah is especially good since it opens the possibility of a mid game with Mountain buff.

Items to go for

The first items you prioritize are not Olaf items. Olaf is so far away that having Olaf items early is a premature and poor investment. The most important item to go for early is Locket of the Iron Solari and, less optimally, Zeke's Herald. These two items work well with Berzerkers since they provide a buff along a line and you typically want to position Berzerkers in a line so that they can have the widest exposure to the enemy team's frontline.

Locket is particularly good with Berzerkers since it gives the units the extra beefiness early to smash a frontline and survive. You'll find high elo players running 2 and sometimes even 3 Lockets in a Berzerkers comp. The best unit to put Lockets on is Volibear. He can hold these lockets the whole game; they give him extra tankiness so he can proc Electric buff longer and the extra spell power doesn't hurt.

If you don't have locket components, then you can go for Olaf items. The best Olaf items are: Bloodthirster, Rapid Firecannon / Guinsoo's Rageblade, and Dragon's Claw / Phantom Dancer / Trap Claw (I don't like to prioritize Hush in a Mage-less meta and Olaf already has the Glacial buff). You can also just get Thief's Gloves, which is good to drop on a random Berzerker or Zed.

In the mid game, you want to get your 6 Berzerkers up. The tough part to doing so is finding that Olaf, which is a 4-cost unit. In lieu of having the Olaf, you can consider running 3 Berzerkers with 4 Wardens.

The Electric and Berzerker synergy bonuses are often strong enough to carry a Berzerkers comp through the mid game.

There's nothing complicated about what units you should go for in the mid game. Basically, if the unit is a Berzerker, you buy it (unless you've already 2-starred the unit, of course).

You really want to find Olaf in the mid game as the 6 Berzerkers buff is a crucial powerspike. Save up gold to roll down at level 7 for Olaf. If there are few other Berzerker players in the lobby, consider rolling a few rounds after the typical points to roll (stage 3-2, 4-1, 5-1, etc.). This way, the other players in the lobby thin out the unit pool for you to more easily find Olafs.

If you don't find Olaf, consider running 4 Wardens and 3 Berzerkers. This is the next best thing to 6 Berzerkers. Wardens are typically cheap and synergize well with Berzerkers (Orn is core to the comp already, and Braum gives Glacials).

A quick side note: you want to prioritize Bloodthirster item components in the mid game. From my testing, the sustainability that Bloodthirster gives to Olaf is invaluable. Olaf would often die quickly if he didn't have a Bloodthirster but if he did, he'd often be the clean-up crew at the end of every fight.

Berzerkers is not a comp where you need to roll aggressively. Your mid game is incredibly strong if you have Lockets and upgraded Electric units. If so, you can just chill and save up gold so that you can level up and roll down to find your Olafs.

An example mid game comp when you find Olaf: 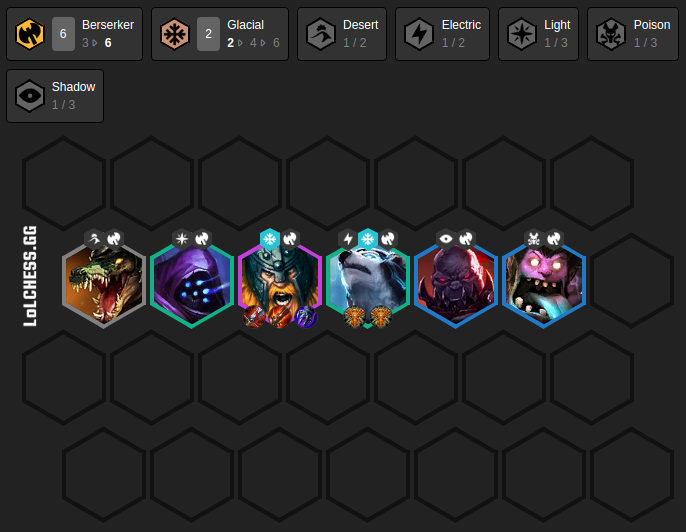 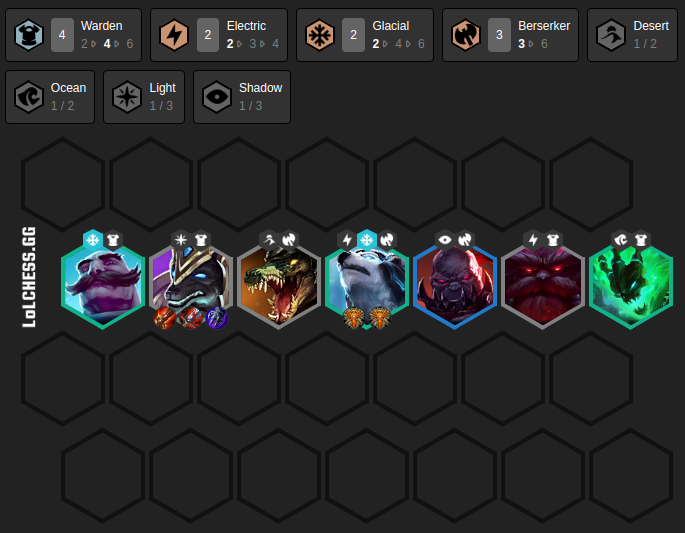 In the late game, you have a few possible pathways. The one most common decision you'll make is either going for 3 Electric (with Zed) or Poison (with Singed). 3 Electric is cheaper since Orn is already part of your comp, and you just need to find Zed as your 8th unit. Poison is more expensive since you need to swap out Orn for a Twitch and find Singed as your 8th unit.

As for how you make this choice, you typically go for Poison if the lobby is Mage or Summoners heavy, and Electric if there're more Blenders or other Berzerkers. Often times, you don't have the luxury to make this choice and you should go for the variant that you have the best units for (e.g. if you have Zed 2, go for the Electric variant).

At level 9, you can actually have both the Electric and Poison synergy bonuses by dropping Orn and adding Twitch and Singed. This gives you 2 Electric and 3 Poison.