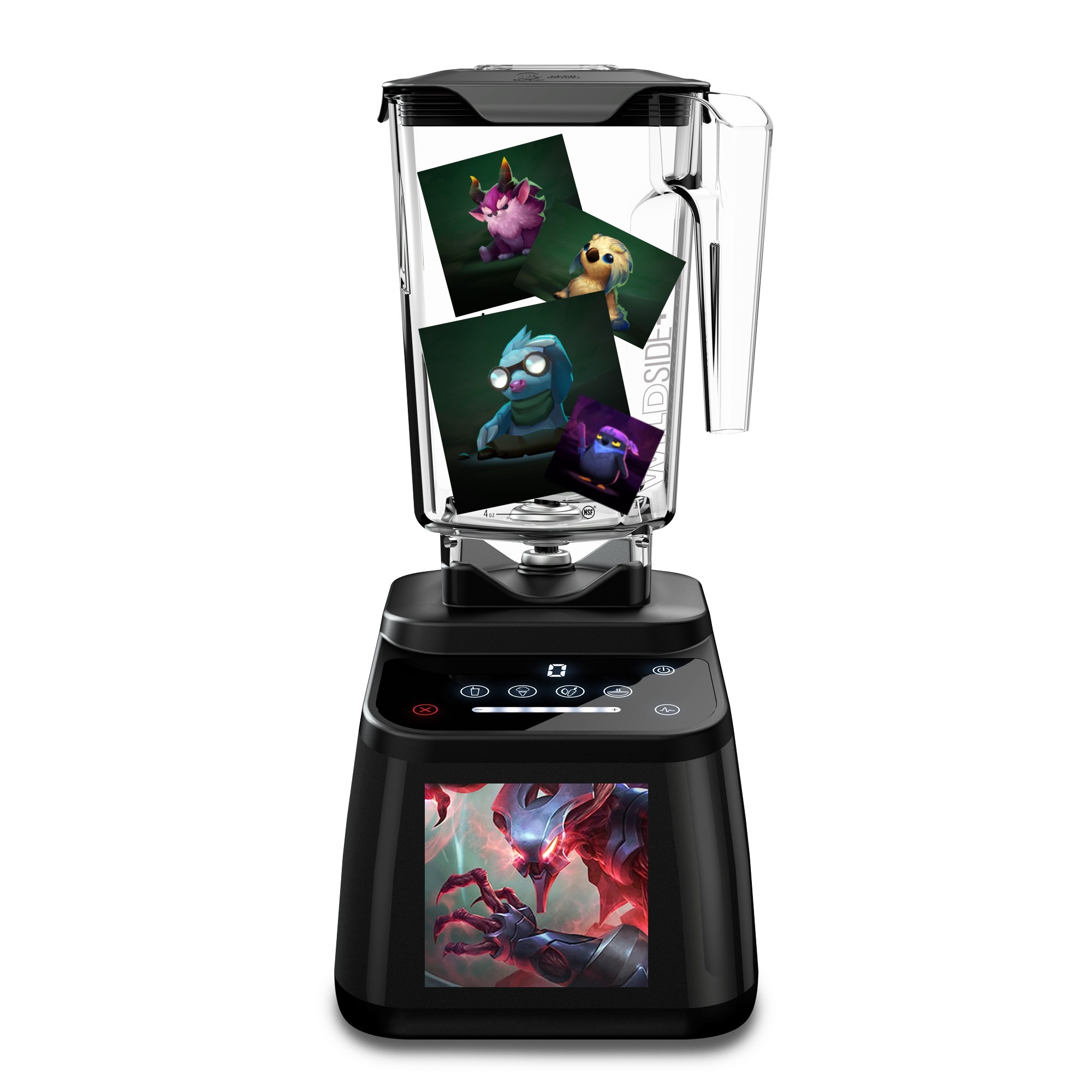 This comp, commonly known as the Blender comp, is centered around Nocturne, Sivir, and the Blademaster class. The strength of the comp comes from a stacked Nocturne cutting through the opponent's backline while a Sivir with Hush silences the opponent's entire team.

This is a guide on how to play and win with the Blender comp. 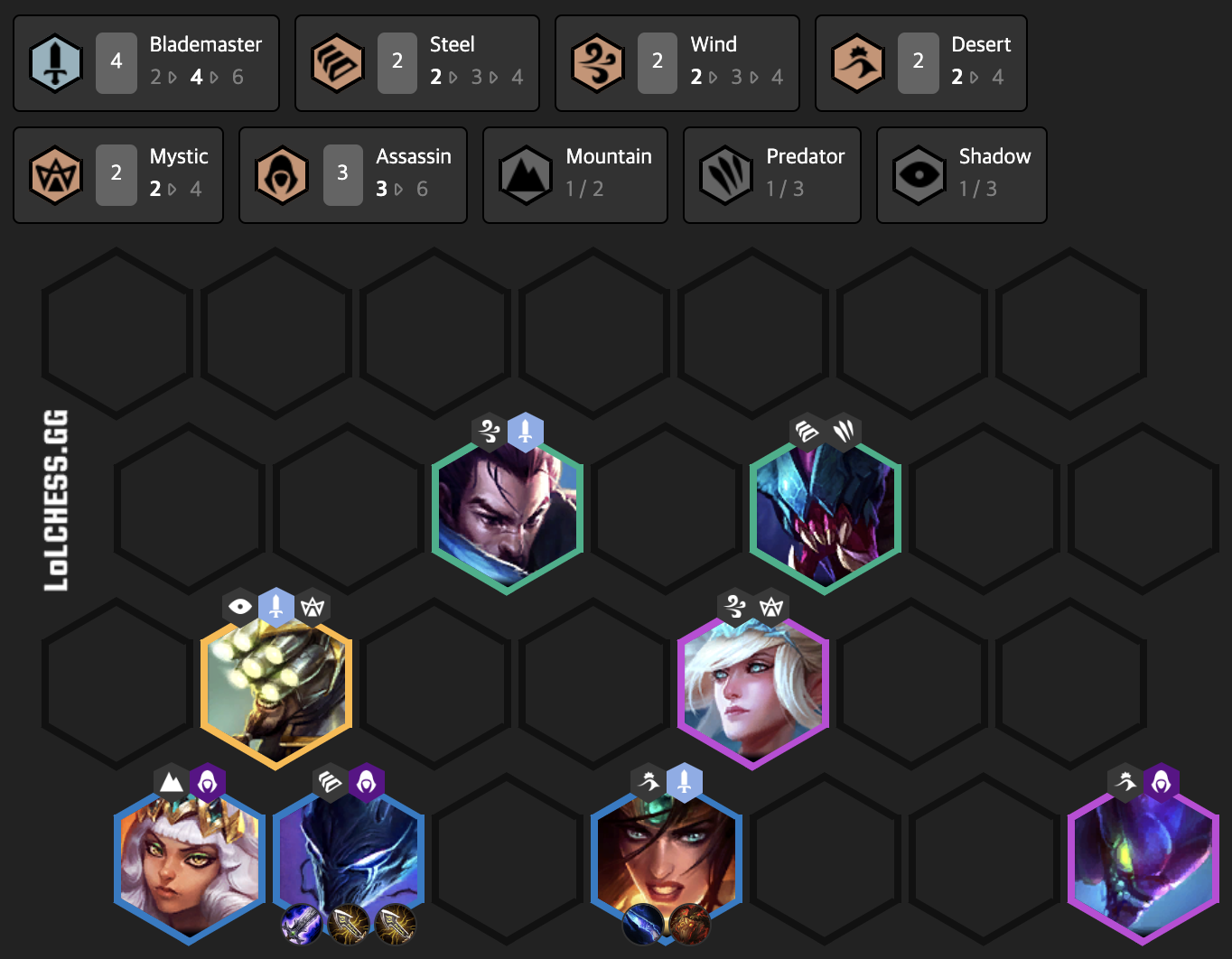 The most important thing to do in the early game is to get a Spatula (spat). A spat combines with a bow to create a Blade of the Ruined King (BotRK). Place this on a Nocturne later on to turn him into a Blademaster. Because Nocturne heals and does AOE damage every third attack, the Blademaster bonus (Blademasters have a 40% chance to strike additional times each attack) works VERY well on him and is one of the core reasons why Blender is so strong. The other benefit to having a Blademaster Nocturne is synergy efficiency: the comp gets all of its important synergies at level 8 instead of level 9. 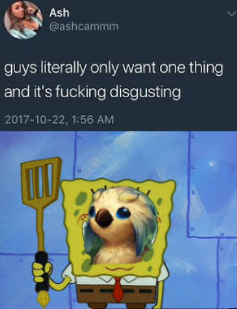 In the carousel at the start of the game, if there's a unit with a spat, immediately position your Little Legend so that you're the first to get to it. Expect to compete with other players for this spat.

Quick tip: when you're waiting outside the carousel circle for the spat, in order to be the first to get in, you want to be the first player to register a click with the server the moment the circle drops. To do so, you need to click into the circle as frequently as possible and this is maximized when you're not only right clicking, but also attack clicking (press A) to get in. Right clicking in conjunction with attack clicking increases the frequency at which you're issuing move commands into the circle.

If you don't get a spat in the starting carousel, don't fret, there're still a few more chances to secure an early spat. An alternative item to get besides a spat is a bow or sword. If another player got the spat in the start carousal, they'll most like go for Blender as well and you should scout them often.

The next best opportunity to get a spat is in the stage 2 carousel. There is a high chance that a spat will spawn here. You want to be the first to be let out in this carousel to maximize your chances of getting it. This means that you need to have the least (or second least HP) in the lobby. To do so, many players like to intentionally lose the first three PVP rounds before this carousel. This is commonly known as "inting for a spat" (int = intentionally feeding, which comes from League of Legends).

If you don't get a spat from this carousel, you might want to consider pivoting out of Blender. Playing Blender without BotRK is NOT a fun time.

As with most other comps, the early game is pretty straightforward. You want to have a good balance between being as strong as possible, with the minimal amount of gold invested, and an easy way to transition to your comp's mid game. The only difference is that you often need to int the first 3 rounds before the stage 2 carousel to secure that early spat.

For Blender, good units to run early are Renekton or Leblanc. They can both hold Nocturne's items. If you run Renekton, try to pair him with a Sivir. This gives you the Desert synergy bonus and Sivir's also part of the Blender comp, making the mid game transition easier. If you run Leblanc, you can also run Woodlands and Druids.

Besides Leblanc, try to stay away from 2-cost (or more) units that are not part of the Blender comp. They're too expensive. Don't hesitate on picking up Yasuo and Rek'Sai though, they're both 2-cost units in the final Blender comp.

Another important point is that you don't want to get baited into buying too many 3-cost units that are part of the Blender comp early. They won't have a huge impact on fights and often times will only serve to slow down your economy. The exception is, in my opinion, Nocturne and Qiyana (not Sivir, since she has low fight impact early on).

When you get a rod, don't panic. Even though Nocturne and Sivir can't use rods well, you can build a Locket with the rod (rod + chainmail). Lockets are versatile items that can save a lot of HP in the early and mid game. You can also use the rod to build a Guinsoo's Rageblade (rod + bow) for Nocturne. It's decent but not great. Nocturne should burst people down, not spend a lot of time auto-attacking.

Playing around a rough mid game

One of the biggest weaknesses of the Blender comp is that it can be really weak in the mid game. This is because the comp only dramatically powerspikes when it has key upgraded units with the right items. Otherwise, the comp's power level increases very slowly. Other comps, like Ocean Mages, have more smoothed out power curves. As such, inexperienced Blender players will often find themselves losing too much HP during the mid game as they take too long to power up, resulting in a bottom 4 finish.

So how should you play Blender knowing that the mid game can be rough? Souless, a popular high elo TFT streamer, opts to roll aggressively during the mid game until he hits key upgrades. I've seen Souless completely ignore his economy and roll to 0 at stage 3. This playstyle is the complete opposite to how most of the other comps are played, where econ is king. Souless has been playing almost solely Blender for the past couple weeks so he should be very familiar with how to pilot this comp. 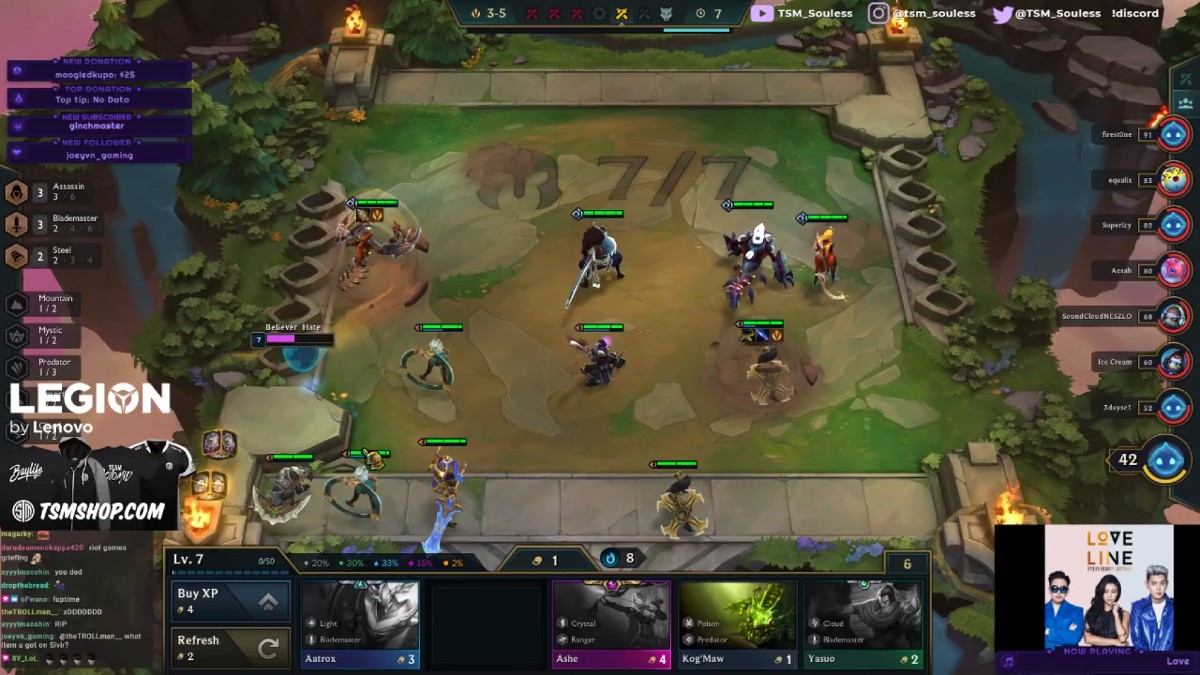 The reason he ignores his econ in the mid game is that Blender is a relatively cheap comp. A strong economy is not necessary since it doesn't require multiple 2-star 5-cost units to stay strong in the late game. Blender scales into the late game by 3-starring Nocturne and Sivir.

Rolling earlier and aggressively can also give you an edge over other Blender players in the lobby.

Knowing this, the mid game playstyle formula is to get to level 7 as fast as possible with sufficient gold (30+) to roll down. You can often get to level 7 before stage 3 ends. Once you do, it's your choice whether you roll down immediately to upgrade your comp, or be greedy and do it after wolves.

Go for the former if you're weak and/or there are other Blender players in the lobby. Go for the latter otherwise. When rolling, if you don't find anything, try not to go below 10 gold. Having at least some leftover gold gives you another chance at a roll down later on. You can stop rolling when you 2-star Nocturne and Sivir.

In the mid game, you need to have a 2-star Nocturne, 2-star Qiyana, and 2-star Sivir to have a chance at stabilizing. You can achieve the 4 Blademaster synergy bonus with a Blademaster Nocturne, Yasuo, Sivir, and Aatrox. Keep in mind, Aatrox is a placeholder unit for Master Yi so you don't need to prioritize 2-starring him. It's quite expensive doing so anyways since he's a 3-cost. 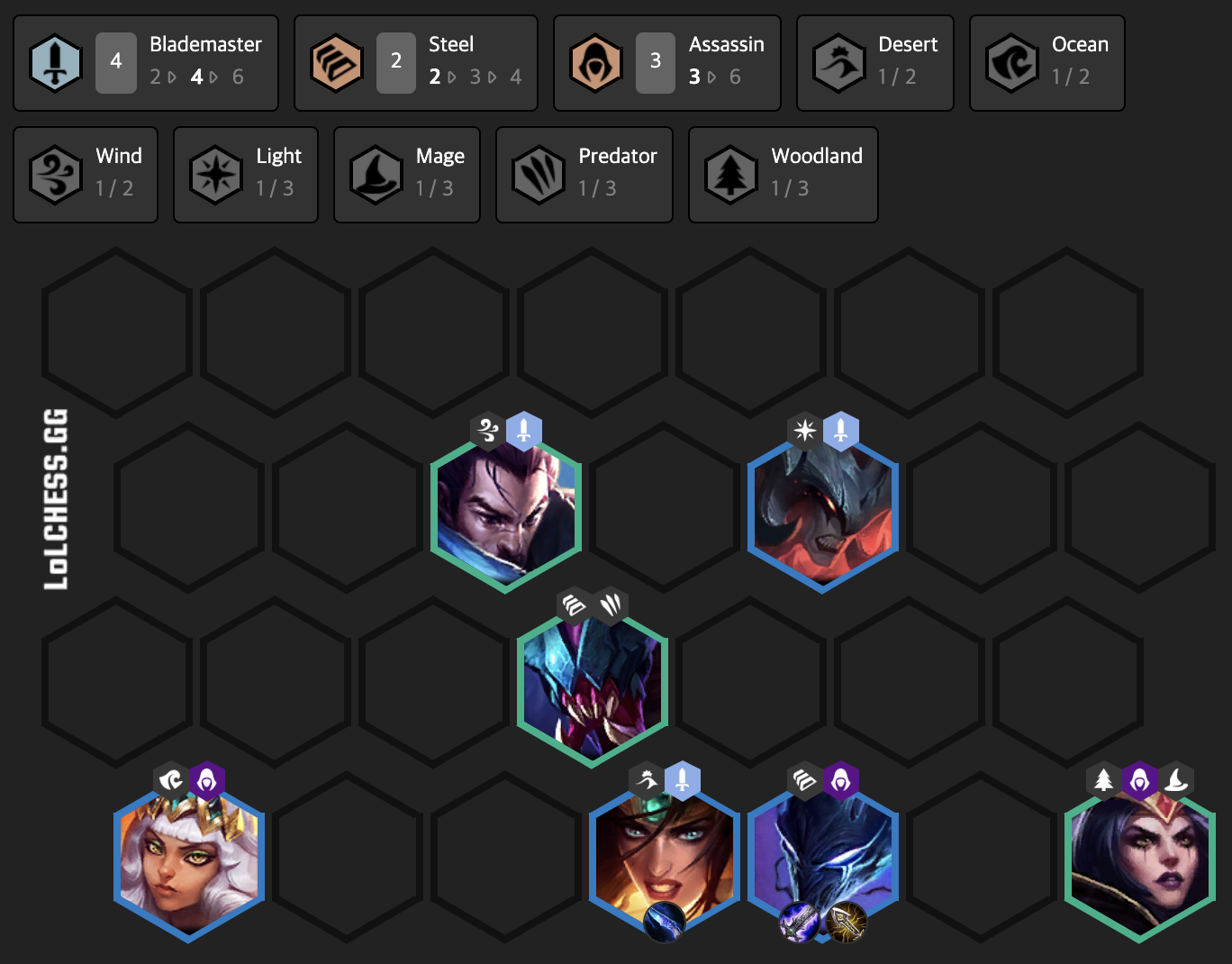 In constrast to a tough mid game, the late game for Blender is relatively simple.

A typical level 7 Blender comp has 4 Blademasters, 3 Asassins, 2 Steel, and 2 Desert. At level 8, your goal is to put in a Janna for 2 Cloud and replace Aatrox with a Master Yi for 2 Mystics. At this point, the comp is complete synergy-wise.

The strongest late game power spikes for Blender happen after getting a 3-star Nocturne and/or Sivir. As such, you want to stay at level 8 and roll for both of them. Usually, at this point in the game, you're the only Blender player in the lobby and Nocturnes and Sivirs will be uncontested. From my experience, getting a 3-star Nocturne alone is a massive power spike.

Another late game power spike to consider, if you get lucky, is adding in a Steel Lux. Steel Lux can either replace Rek'Sai at level 8 for 3 Steel, or as the comp's 9th unit at level 9 for 4 Steel. The general consensus is that Steel is OP, even at 2 Steel, so 4 Steel is absolutely bonkers. That said, I'd recommend not going to level 9 without first getting a 3-star Nocturne or Sivir.