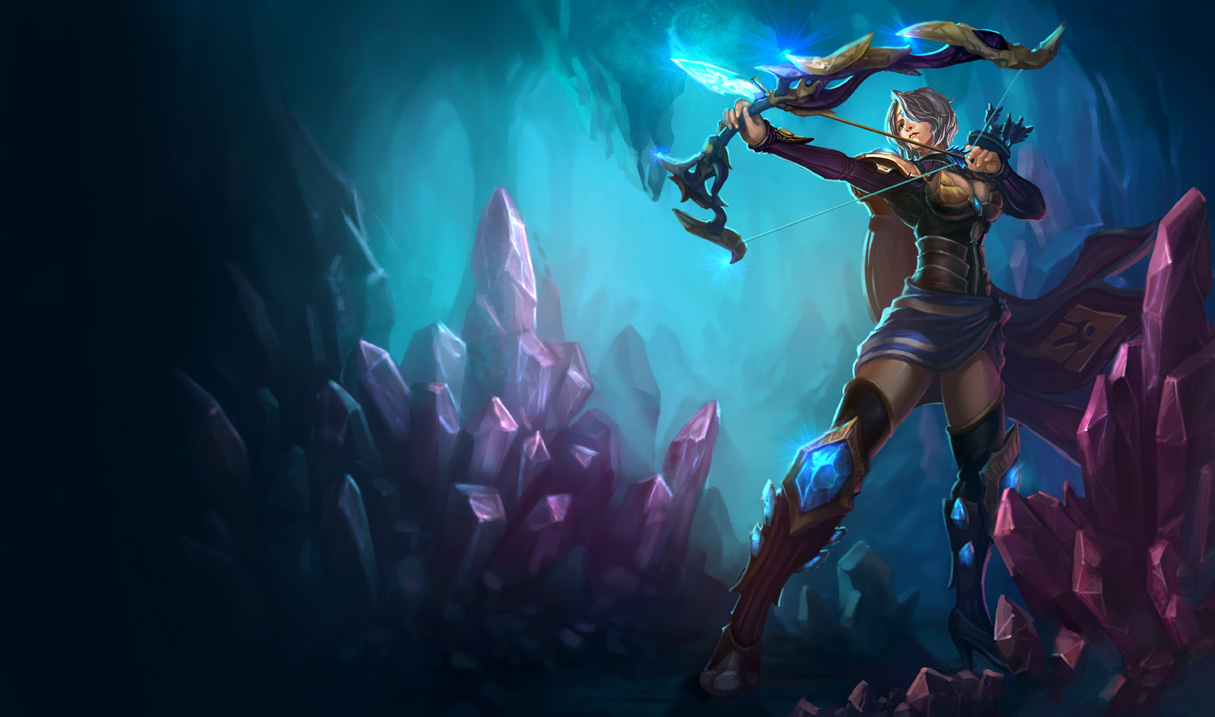 Although Rangers are unpopular right now, Agon, a high Challenger player, frequently plays and finishes in the top 4 with Rangers. This is a guide to playing Rangers Agon-style. Patch 10.1 is rapidly approaching and this will probably be the last comp guide for Patch 9.24b.

Agon streams on Twitch at: https://www.twitch.tv/agontft

Note: Agon was consistently playing this comp when he was within top 5 NA and doing well with it then. His LP has fallen quite a bit recently but it's not because of this comp since he found success with it even when he was rank 2 NA. If anything, Rangers should be more effective now with Berserkers being so popular. Rangers is not a comp you should force every game given that they're particularly weak against Infernos and Blender. 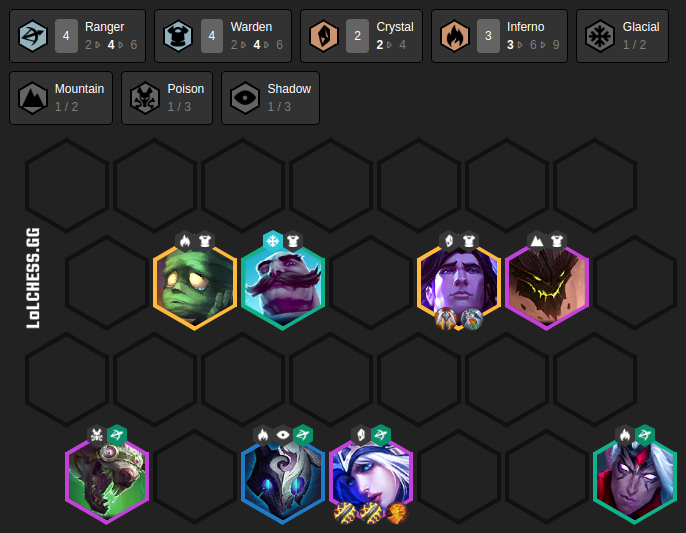 Why should you play Rangers?

Rangers counter Berserkers and Berserkers are very popular right now. Ranger comps rely on uncontested units and uncontested items to power-up early and carry themselves to the late game to find high-cost Wardens.

Why shouldn't you play Rangers?

Infernos and Mages counter Rangers. Blender counters Rangers until you have Crystal buff. In the current meta, the biggest threat to Rangers are 6 Inferno comps.

The Ranger comp's early game has a similar goal to most other comps: you want to have a good balance between being as strong as possible, with the minimal amount of gold invested, and an easy way to transition to the comp's mid game.

For Rangers, an ideal early game consists of 2 Wardens as a frontline, with one of them being Braum, and two Rangers as a backline, with one of them being Vayne. Braum is a key frontline unit for the comp's mid game. He tanks a lot of damage and activates Glacial buff with Ezrael. Agon places a high priority on Braum. Vayne acts as an item holder for Ashe, who'll be your late game carry.

This comp's playstyle is flexible and aggressive in the early and mid game. You don't want to roll at level 6 or below so you're relying on building early items and leveling aggressively to stay strong and get to level 7 quickly. To that end, a strong item to build early is Statikk Shiv. Shivs can be placed on almost any champion and be effective. They give you a lot of early and mid game damage. In the late game, they should be transferred to Ashe, which has a high attack speed and uses them well.

You should also look to level early. Leveling early reliably increases the power of your comp and also makes it easier to find the comp's mid game units. It's not uncommon for Agon to level up to 5 at stage 2-5 (right after the stage 2 carousel). There was even one game when he went to level 6 at stage 2-5.

What if you don't find ideal units?

Since you don't want to roll in the early game, you're usually not going to find ideal early game units. In that case, your goal is to still build the strongest comp with whatever you get, which usually means having a decent frontline with a carry to hold Ashe's items. Some examples include:

What if you don't find ideal items?

If you can't complete Statikk Shivs early, you can either build other Ashe items or items for your frontline. The comp's playstyle is aggressive and you don't want to greed items. Here a few items to consider (for a full items list, check out the Itemization section below):

A standard game plan for your mid game is to level up to 6 at stage 3-2, then level up to 7 right after the stage 3 carousel (or at stage 4-1 if you're short on gold). When you get to 7, you have two options. If you can either start rolling immediately if you want to stay strong and continue a winstreak, or delay your rolling until after the rest of the lobby has rolled. The latter option gives you a higher chance of finding your key units like Ashe since Rangers are rarely played and you're probably the only person playing them in your lobby. When the other players roll, they'll remove units from the pool that you don't need, making it easier for you to find your Rangers when you roll. The tradeoff is that you're going to lose health as everyone powers up earlier than you.

When you're rolling at level 7, don't roll below 10 or 20 gold as you need that baseline interest to get you to level 8 with a sizable war chest to roll for high-cost Wardens.

What units to look for

In the mid game, you want to build up a solid frontline filled with placeholder Wardens that you'll replace later with 5-cost Wardens like Amumu and Taric. Wardens to look for are: Braum, Malphite, Thresh, and Nautilus. Your backline should consist of at least 2 Rangers and ideally 4. Finding Ashe 2 is very helpful in the mid game though if you don't find her or 2-star her, you can keep using Vayne as a placeholder or transition to Ezrael or Twitch as a placeholder Ranger. Thankfully, Ashe is not a contested 4-cost unit so the odds are, you're able to find her.

Agon takes the "flexible and aggressive" playstyle to the extreme. It's not uncommon for him to level very aggressively when he feels strong and wants to maintain a winstreak. In one game, he leveled to 6 at stage 2-5. In another, he leveled to 7 at stage 3-2. Both are extremely early points to level for this meta.

Because he doesn't roll at level 6 or below, his comps at these levels often look weird and not Ranger-like. He plays whatever he gets to be as strong as possible. For example, in one game he played Mystics, Poison, Predators with an Annie with 2 Statikk Shivs to winstreak till level 8 before rolling.

This comp has multiple late game variants. The variant you choose to pivot to depends on what you find and what the rest of the lobby is going.

The standard variant is 4 Wardens and 4 Rangers.

You can also drop 4 Wardens for 2 Wardens and Poisons. This is strong in a caster-heavy lobby. 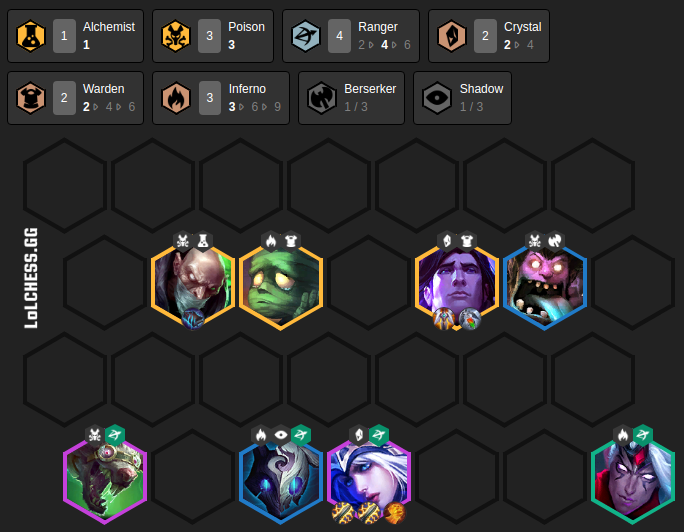 A third variant uses Crystal Lux for 4 Crystals, which is tankier than 4 Wardens. 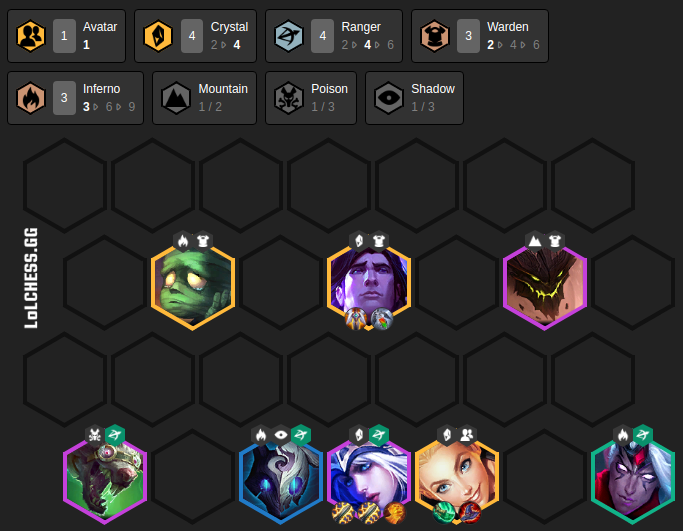 You can even drop 4 Rangers for 2 Rangers to add in Poisons or Mystics. 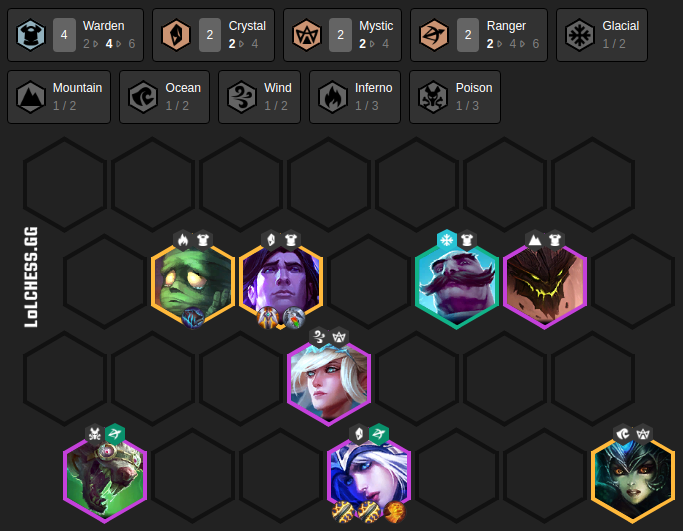 The comp's two most important late game units are Amumu and Taric. Amumu is an overpowered unit and Taric gives you Crystal buff. You should roll for these units once you get to level 8. If you find a Crystal Lux, you should definitely include her in the comp for 4 Crystals. The 4 Crystal variant is arguably the strongest late game variant of the comp. However, keep in mind that 6 Inferno comps counter Crystal buff since Inferno buff damages units over time in small ticks whereas Crystal is designed to block burst damage.

As such, you want to corner Twitch and Varus as fodder units since they have a long attack range and aren't likely to move. Place one Warden close to the left edge of the map on the third line and another close to the right edge. This should increase the chances for any sins to start attacking your frontline after killing the Twitch and/or Varus.

Statikk Shiv is a core item for the build as it adds AOE damage, something that Rangers lack. The item outputs a lot of damage in the early and mid game which saves HP and enables winstreaks. In the late game, the item can still output decent damage when placed on Ashe. Statikk Shivs should be built as early as possible.

Auto-attack healing items are strong on Ashe because of her Crystal trait. If the maximum damage she takes from a single hit is limited, then each point of health has a lot more value. Crystal buff also makes raw damage mitigation items almost useless on Ashe since Crystal buff is already mitigating significant damage.

Finally, crowd control mitigation items like Quicksilver and Trap Claw are strong on Ashe because her biggest weakness is crowd control and crowd control effects are very popular in this Wardens meta. When Ashe is disabled, she outputs zero damage. This spells trouble since she's the comp's main source of damage.

Other items that are good on Ashe: