Managing your economy is not just about saving as much gold as possible, since you'll often lose too much HP. In medium speed to slow metas, correctly managing your economy means going into late game with a lot of health and a lot of gold, setting you up for a solid top 4 finish. 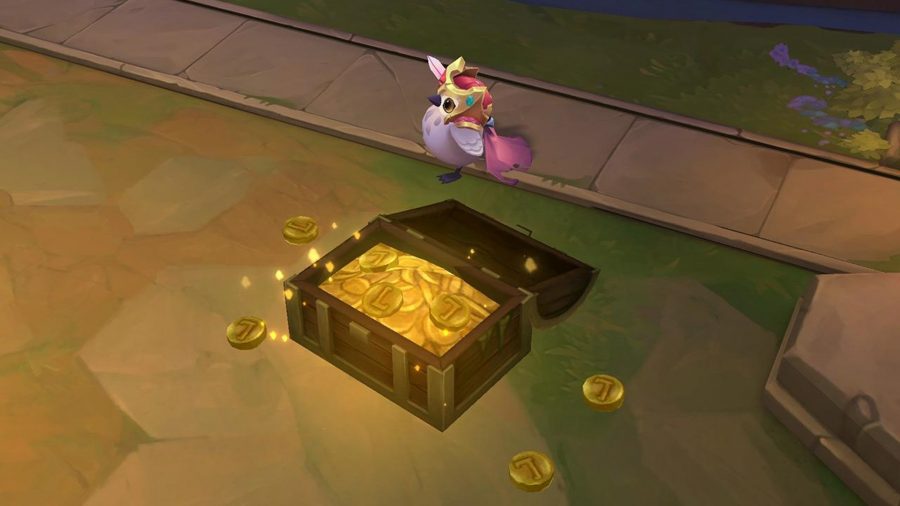 In the current meta, you are rewarded for heavily econning since everyone goes for the Singed 2 or Zed 2 win conditions. Both are rare 5-cost legendary units. Many players are fast 8'ing (not fast top 8, fast leveling to 8) to have the highest chances of finding them.

Even though this meta is skewed towards econning, the principles behind this meta's playstyle can be applied successfully to any other meta.

This article goes over said principles and then goes over an example game played by Kurumx, currently the third highest rated player in NA.

Getting interest early is super important since it jump-starts your economy. Gold earned early compounds into a lot of gold later in the game.

Although this isn't exactly what happens with TFT's interest system, you get the idea. Interest compounds.

No matter how tempting it is to upgrade units that you have a pair of, never roll to 0 gold early on. Since interest compounds, you lose so much power if you tank your interest income early. If everyone else is at 50 gold and you're struggling at 10-30 gold, you'll get to level 7 and 8 way later than everyone else and have a much lower chance of finding Zed and Singed.

3. Scout to determine how much to roll, roll just enough

Probably one of the hardest things to do when econning is to make sure you stay healthy without draining your gold balance. To do so, you need to scout often to get a feel of how strong your lobby is, and then understand how strong your own comp is. If your estimation is right, you'll know the minimal amount of upgrading you need to do (thus the minimal amount of gold to roll) to keep afloat in the lobby.

Although it's easy to describe, estimating how strong you are versus the lobby is very hard. It's non-obvious and usually only comes with experience. One helpful tip in gauging a comp's power is to learn what unit combinations are "overpowered" in the early game. Examples include having the Mountain buff early or having 3 Woodlands or having a Zyra with Morello's. When you see these early game setups, you know that those comps are strong.

Although it might be tempting to build that Brand or Zed with perfect items, sometimes when you're trying to econ, you need to do whatever you can to be just powerful enough to survive. That means using your items over rolling your gold to upgrade units. Having one or two suboptimal items early can translate to a lot of health saved and a lot of gold earned later on.

Don't greed your items. It can make the difference between a fast top 8 instead of a fast level 8.

This is more of a tip than a principle, but having 5 principles looks nicer than 4 principles.

There's an easy trick to get to the next gold threshold during a carousel round.

Imagine you have 18 gold and the carousel round is up next. You feel like you should sell one of your two Syndras to get to 20 gold for the extra interest. Wrong! Instead, you should get a carousel unit that's 2 gold or more, press r to go back to your board, and then mouse over the new unit when it appears and press e to sell right before the next round starts. The extra gold is enough to bump you to 20 gold or more before the next round's interest income is calculated.

Doing this can save you a lot of board power and gold.

How does Kurumx econ? An example game

I'll go over a game where he aggressively econs to level 8 at stage 4-3, finds Zed 2, and ends the game at first place. 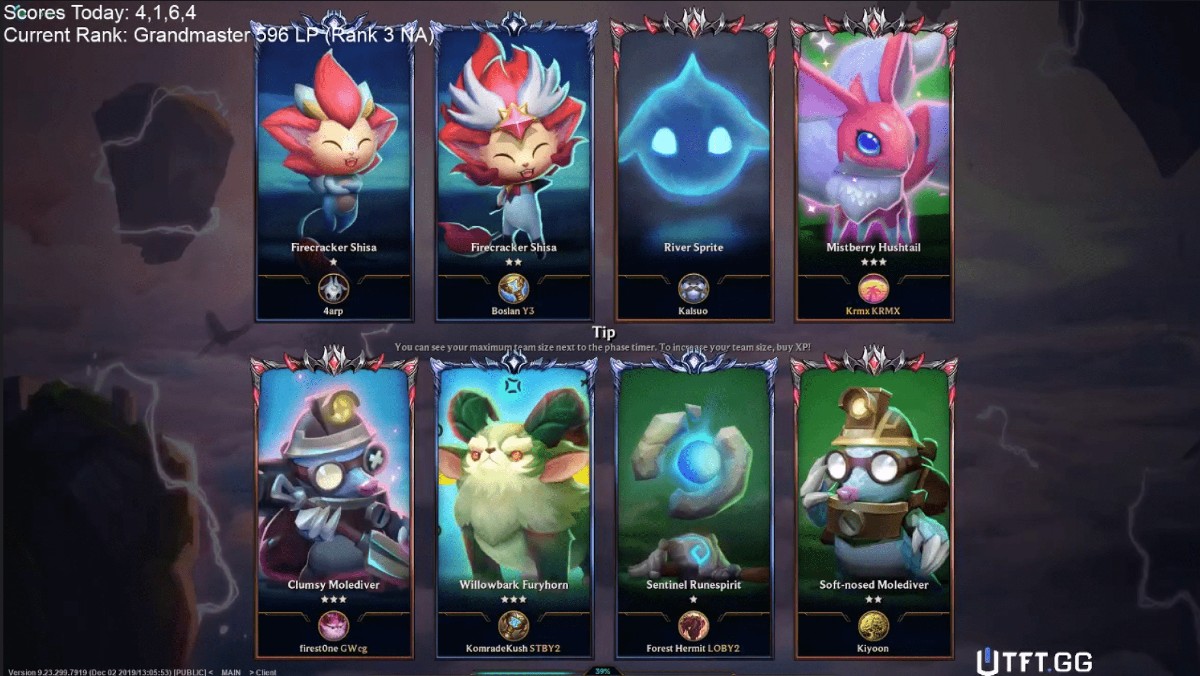 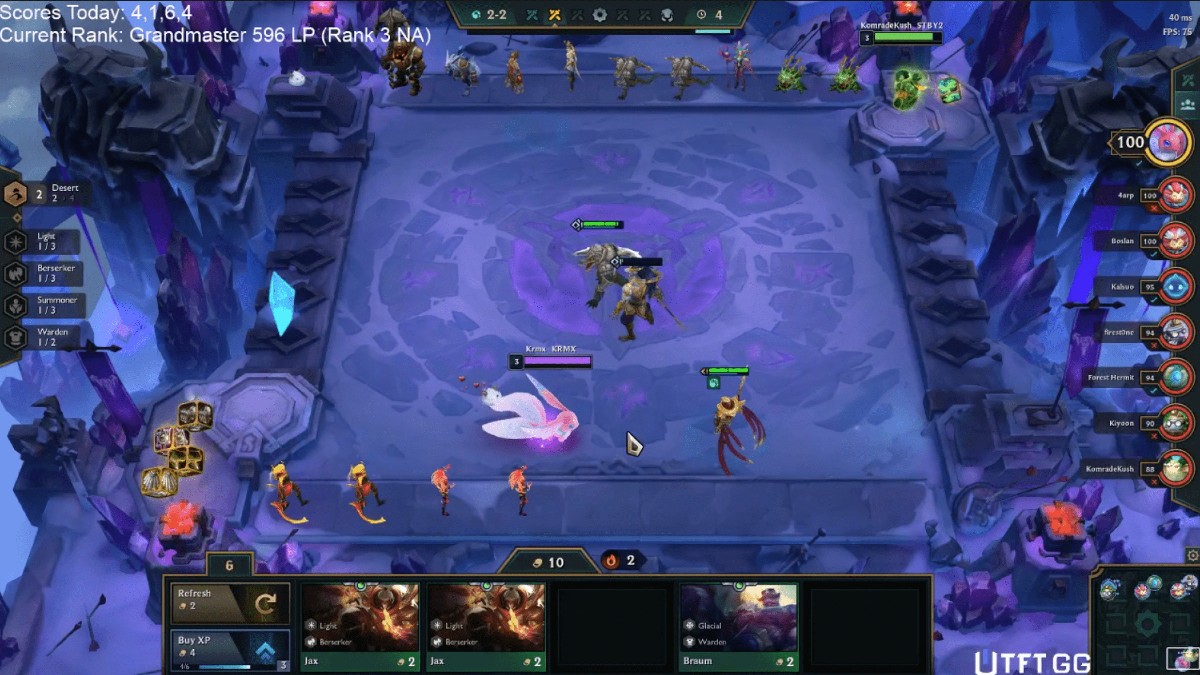 At the end of stage 2-2, Kurum sells units on his carousel to get to 10 gold. 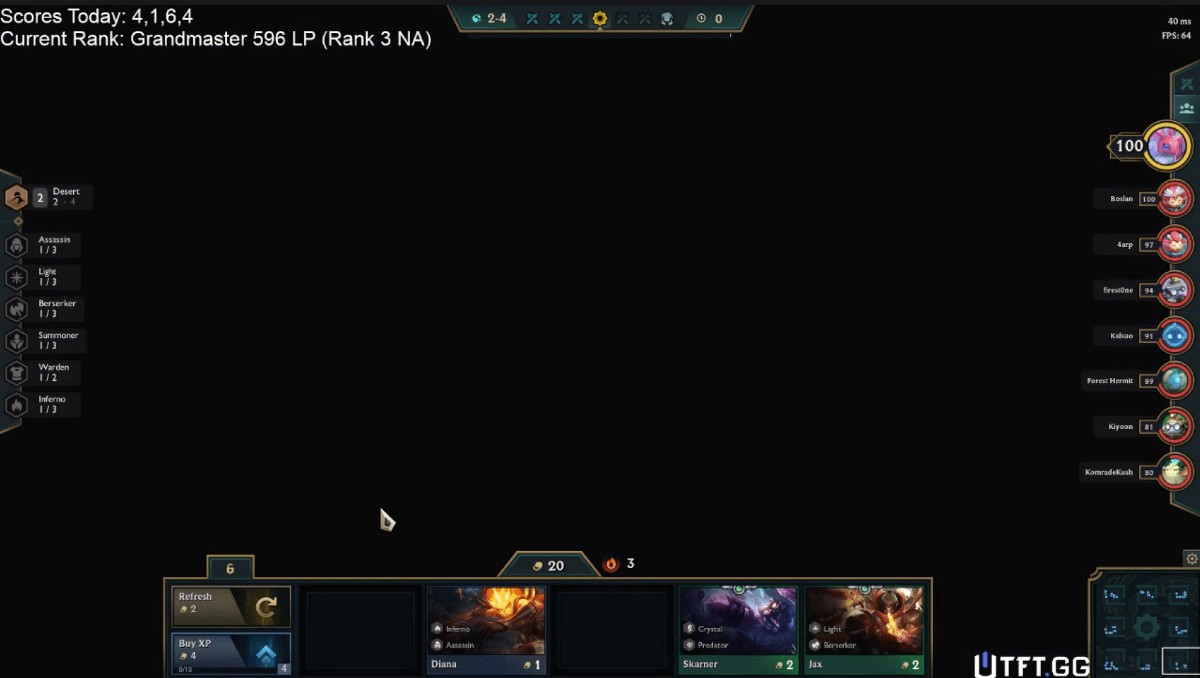 After the stage 2 carousel, he sells his carousel unit and an extra Zyra to get to 20 gold. You're decently rich when you have 20 gold at this time. 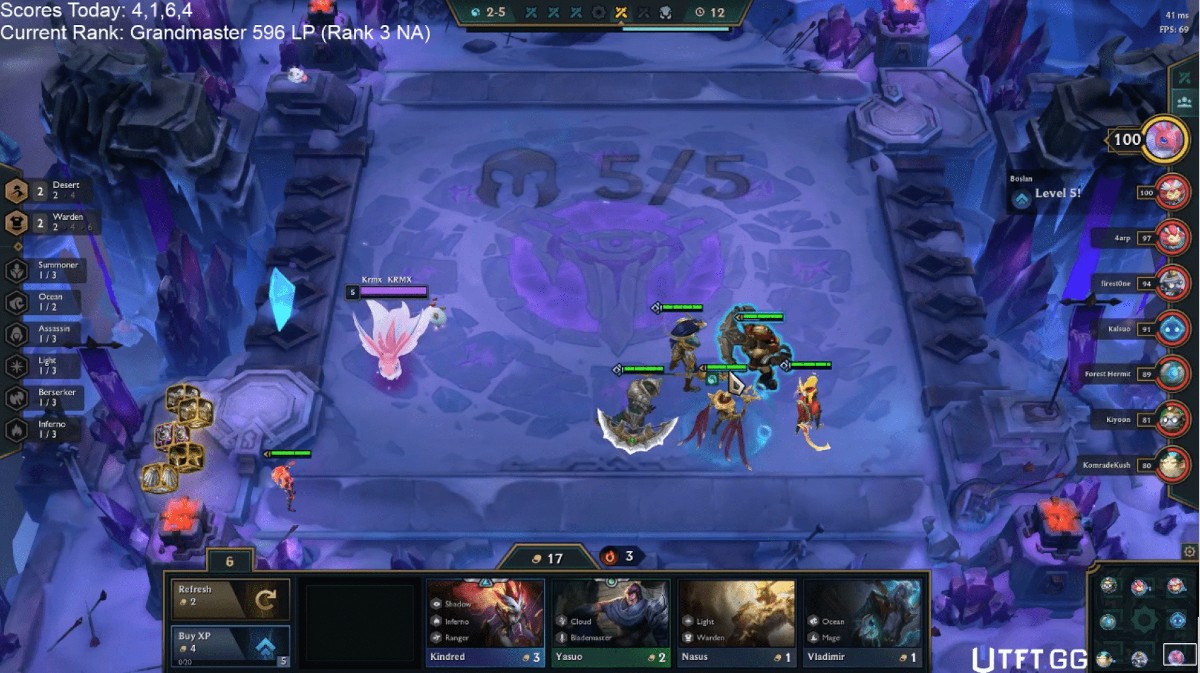 With his extra gold, he levels to 5 to maintain his winstreak. 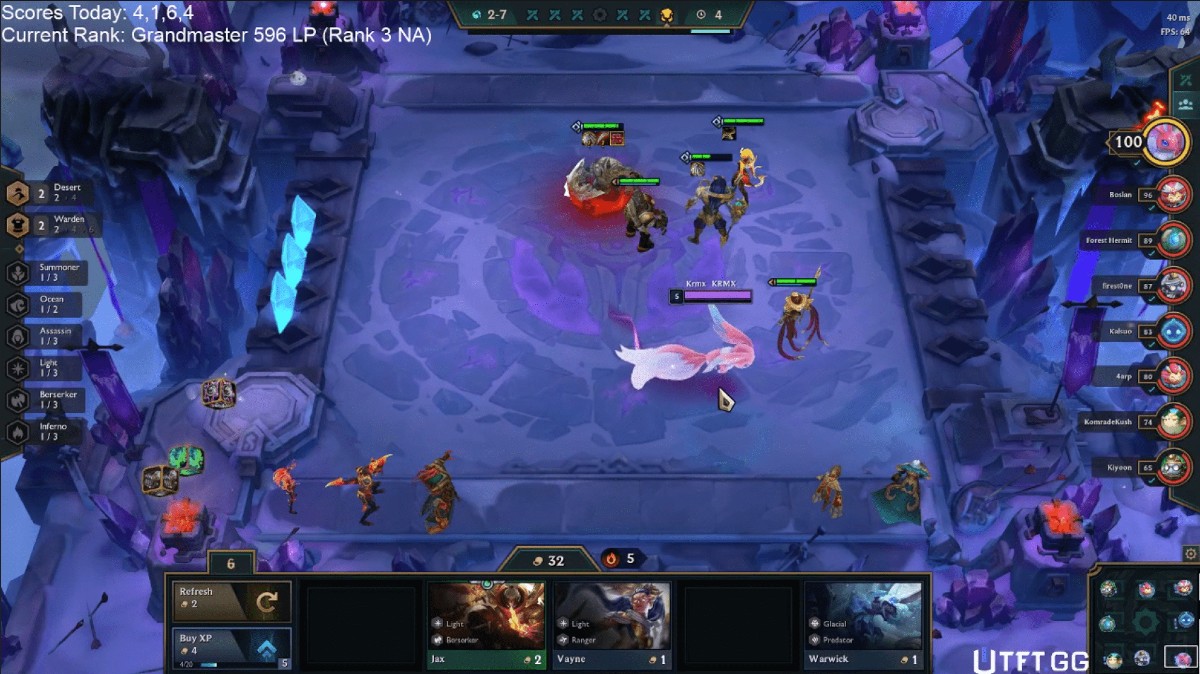 He finds a Neeko's Help at Krugs. Neeko's Help is an amazing item and having it further encourages him to econ aggressively so he can find Zeds or Singeds early. With a Neeko's Help, it's much easier to 2-star either of them. 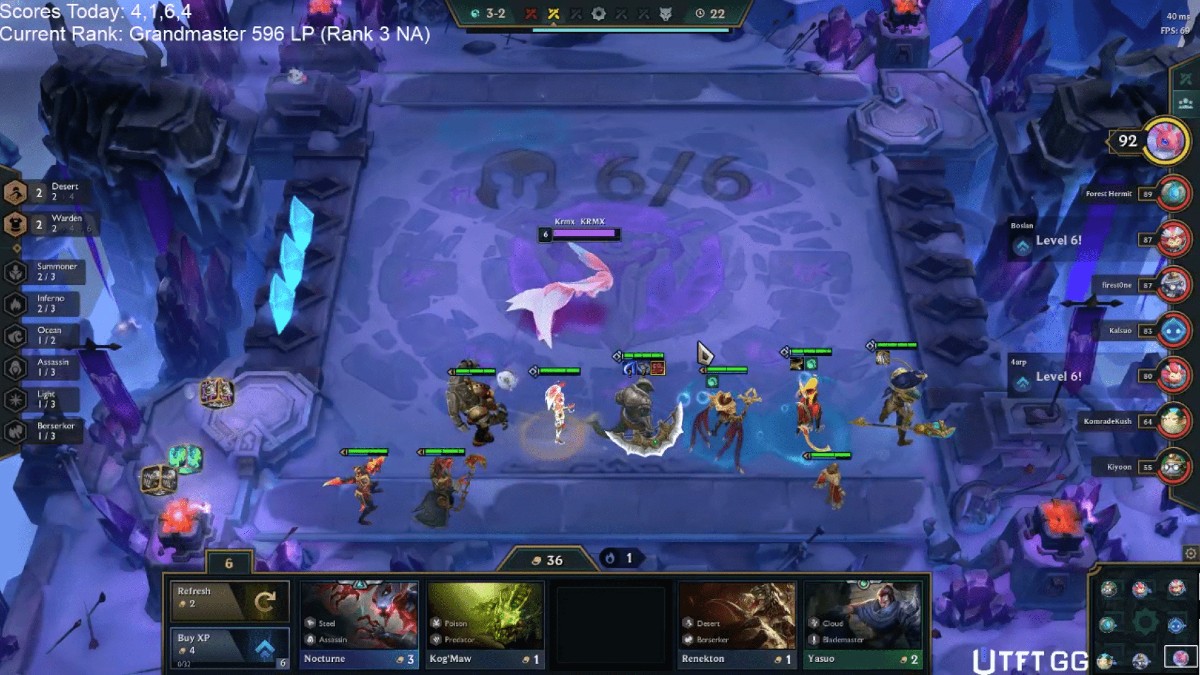 This is important. Kurum levels to 6 at stage 3-2, a standard leveling point, but he doesn't spend a single gold rolling to upgrade units. He makes the assessment that with a 2-star Zyra, 2-star Renekton with Thief's Gloves, 2-star Diana, and 2-star Nasus that he's strong enough to win fights without rolling for units. Besides having a strong econ early, another benefit to not rolling at level 6 is having more gold to roll when you're a higher level, which increases your chances of finding high-cost win condition units. 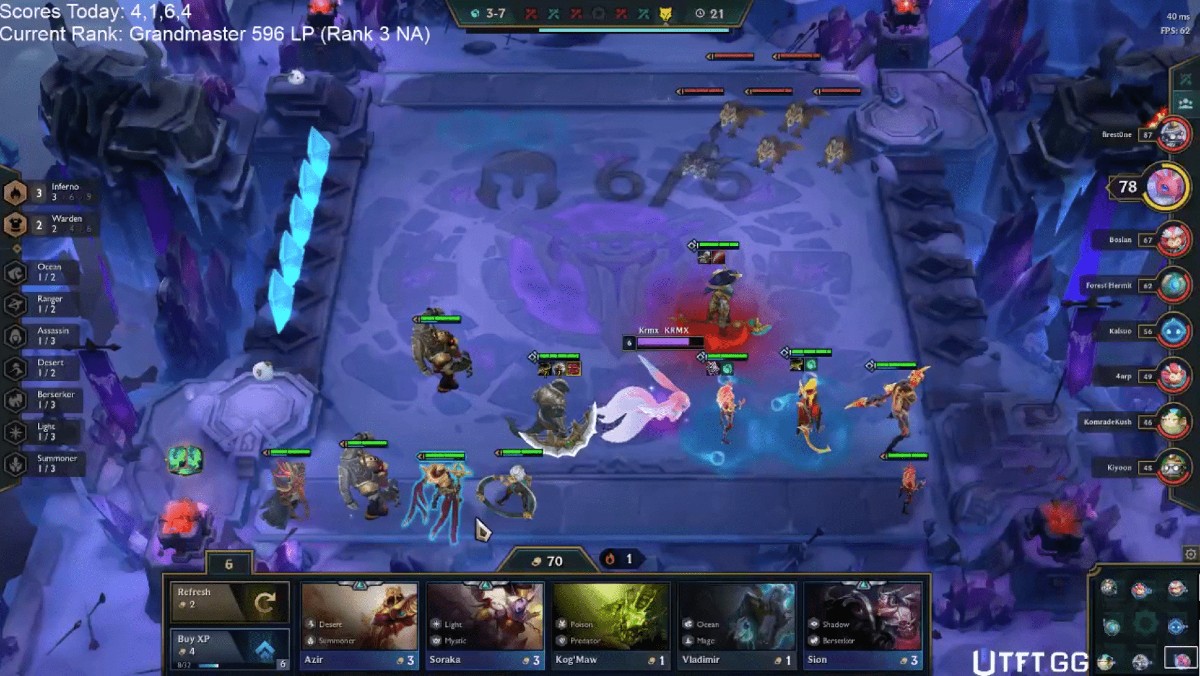 By not sprending any gold after leveling to 6 at stage 3-2, Kurum gets to 70 gold by wolves. His estimation that his comp was strong enough for him to not roll was correct; he's the second healthiest player in the lobby. 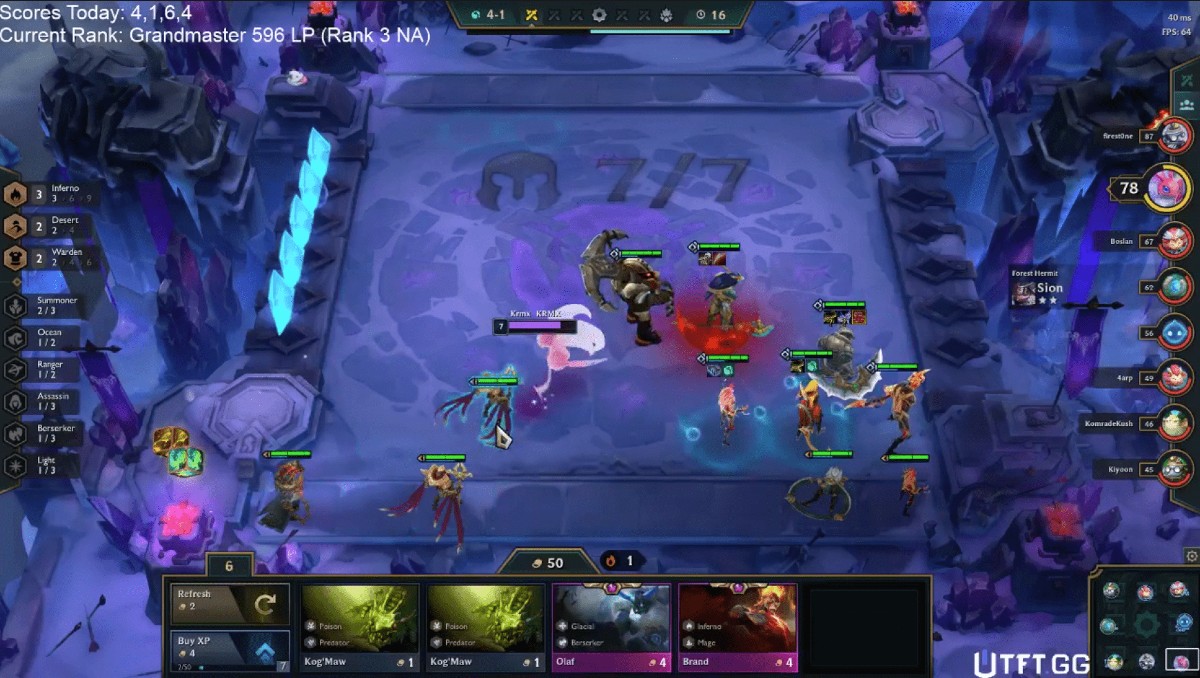 Kurum greeds more and only spends gold to level up at wolves. This allows him to maintain 50 gold. He upgrades Nautilus and builds Morello's on Zyra. He gambles that these two upgrades are enough to let him survive without rolling. 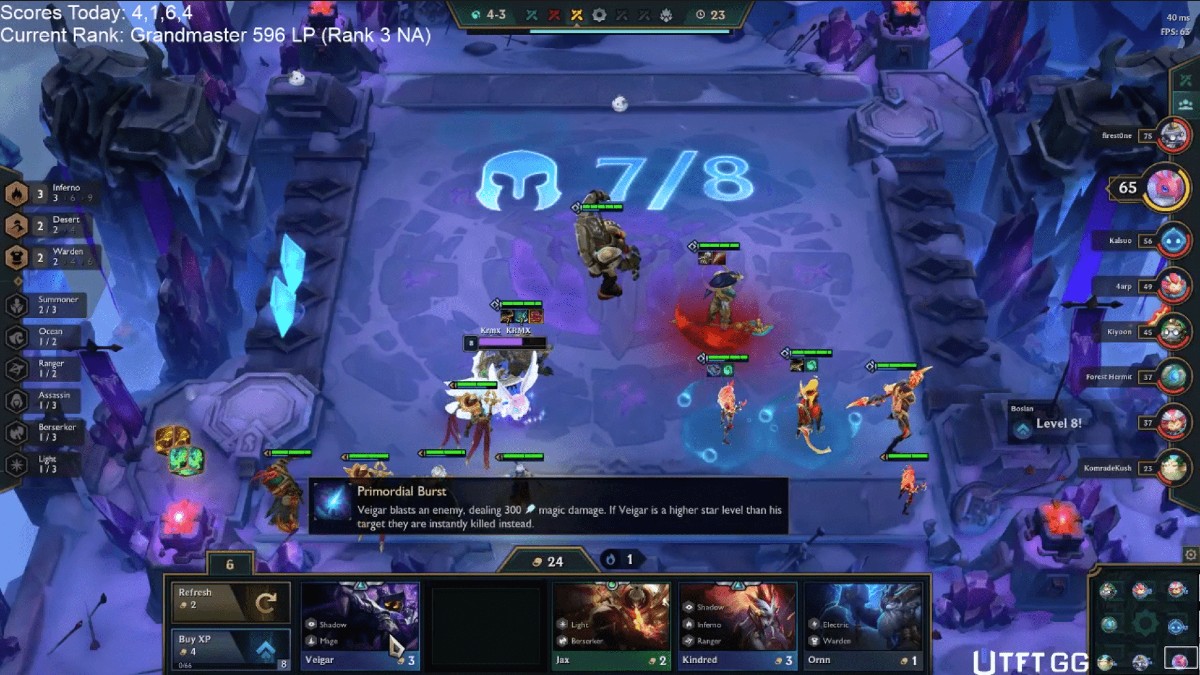 With all the gold he has, he fast levels to 8 at stage 4-3 with 30 gold left. He rolls down some gold but doesn't roll all the way to 0. He's one of the first players in the lobby to reach level 8, giving him significantly higher chances of finding Singed and Zed compared to everyone else. 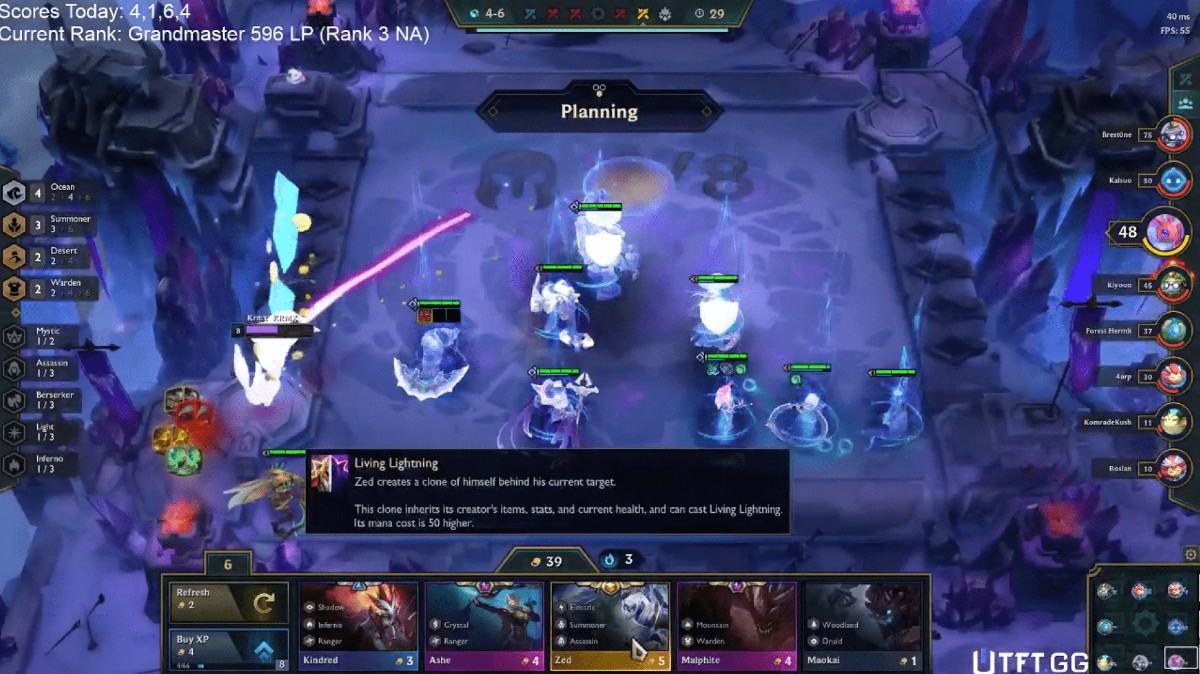 He finds his first Zed with a natural roll at stage 4-6. Being level 8 definitely helped. 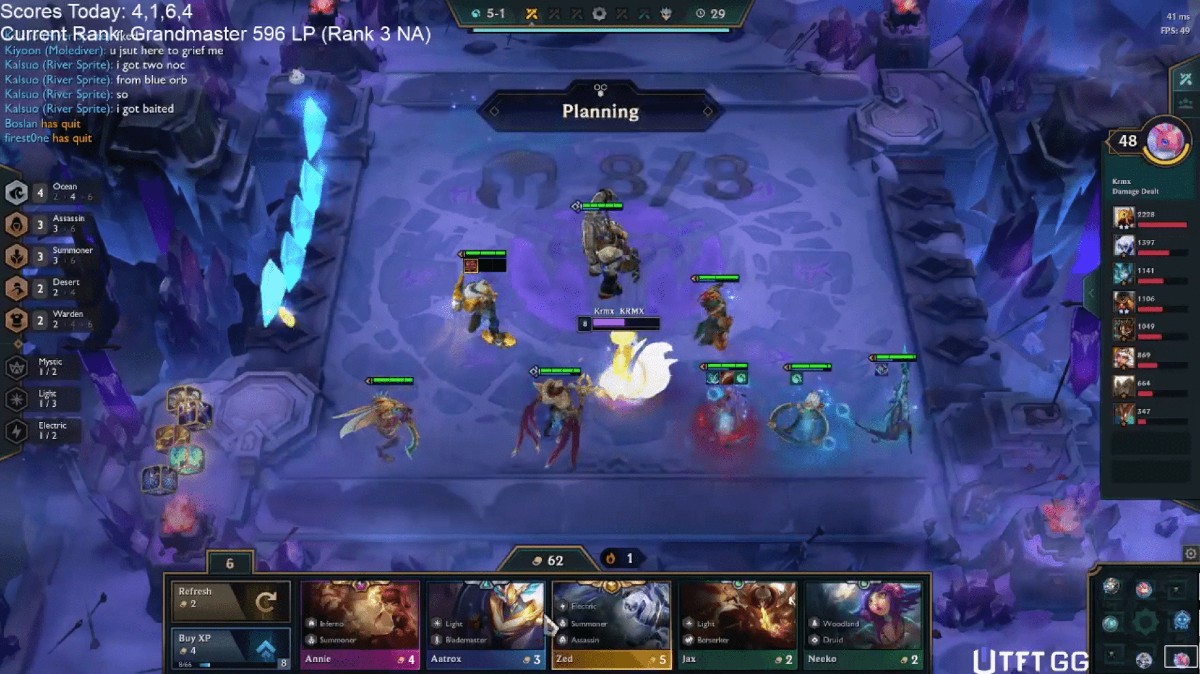 At stage 5-1, he finds a second Zed and with Neeko's Help, is able to make Zed 2. With good items on a Zed 2, he winstreaks from this point until he wins the game. 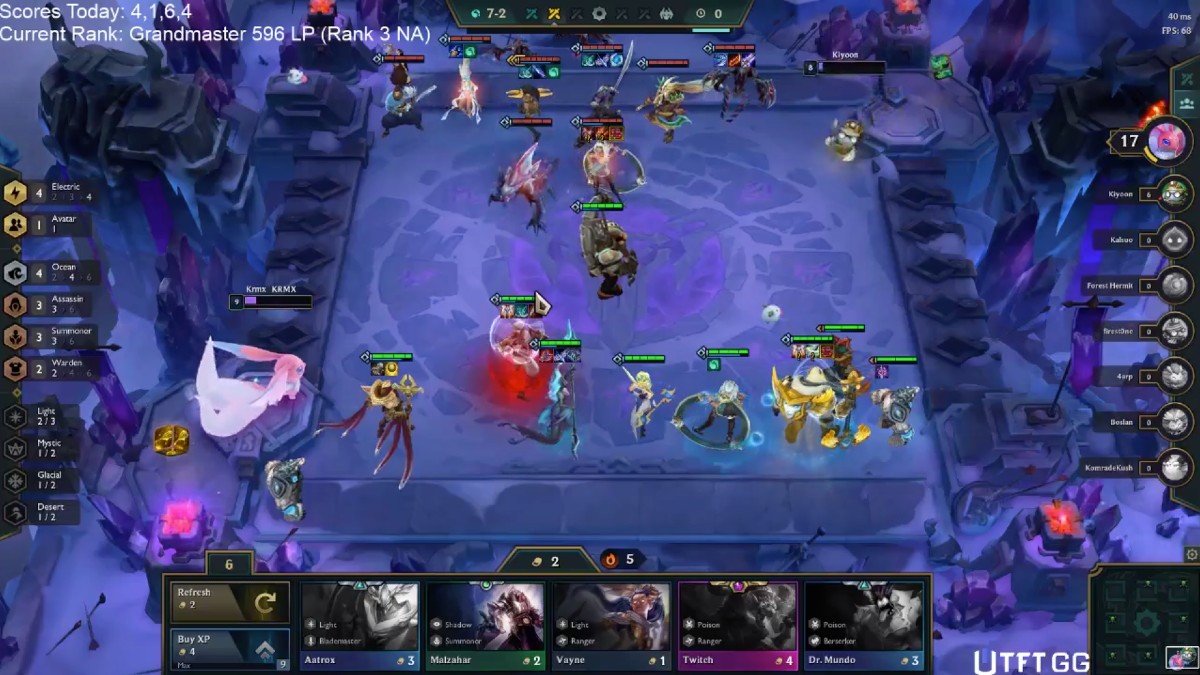 Although it was lucky that he found 2 Zeds through natural rolls, being level 8 before everyone else in the lobby for 4 rounds definitely helped. This game is just one example of how a high level player manages their econ to get to level 8 as soon as possible without losing too much health.