TFT's second season brings drastic changes to the game with a new set of champions and synergies. Most if not all champions from set 1 have been rotated out and a new cast of champions with new synergies replace them. Not surprisingly, this completely upends the way the game is played. These changes can be overwhelming to adjust to, which is why this article aims to help you navigate set 2 and hit the ground running when ranked is released in a few days.

Most of the champions and synergies in set 1 have been rotated out (a few remain, like Braum, Vayne, the Assassin synergy, etc.). Set 2 comes with new synergies classified under two categories: elements and classes. See this link to get a full overview. The new set also introduces the first 7 cost unit, Lux, to the game.

There's a new board mechanic that has interesting gameplay implications. Each game, the boards assume an element from a set of 4 elements: Cloud, Infernal, Ocean, and Mountain. At the start of the game, a random tile (mirrored for the opponent) is empowered by the element. A second empowered tile spawns at stage 3-1. An empowered tile has special properties based on its element:

Items have also been changed. With the new synergies, spatula-based items were expectedly changed to match the new synergies. Cursed blade was removed, with its recipe now creating Runaan's Hurricane. Giant Slayer was nerfed. Both were much needed changes.

The new changes bring new ways to think about your game plan. Here's a succint and comprehensive overview of what I've learned.

Bonuses from the new synergies are easier to obtain (e.g. 2 units for Cloud or 2 units for Mystic). The bonuses have also been designed to act more like soft counters (e.g. Mystic increases magic resistance, Cloud increases dodge chance). This means that it's much easier to mold your comp to be strong in specific situations.

Overall, these synergy changes are very positive. Compared to set 1, it's easier and more rewarding to adapt your comp to what the lobby is playing than to force a comp. By extension, scouting is also more important now.

With adapting being more valuable, scouting also increases in importance. To adapt, you need to know what the lobby is playing. For example, if you notice that many players in your lobby are going for Mages, then it might be a good idea to tech in 2 or even 4 Mystics.

In addition, champion pool sizes have also decreased, making it harder to hyperroll. When you do hyperroll, you need to scout aggressively to make sure that at most one other player is hyperrolling for the same units. If there are more than 2 players going for the same hyperroll comp, all of them will have a bad time.

The game is slower

Early game player damage has been reduced, making the game much slower than season 1's last patch. In that patch, it was not uncommon for players to be at 50 health by Krugs, and 30 health by the stage 3 carousel (monkaW). This was not fun. Thankfully, the new patch reduced player damage from 3 to 2 in stage 2.

A slower game means that you can more aggressively econ in the early game and still have room to set a direction and build momentum in stage 3. Don't be scared to lose early matches in this patch.

This has interesting implications. For example, only on the Ocean map can you get the 6 Ocean synergy bonus since there are only 5 units with the Ocean synergy (Qiyana becomes the 6th on an Ocean map). On the Cloud map, without Qiyana, it's hard to get the Cloud synergy early since the only low cost Cloud unit is Yasuo. Jaina is a 4-cost and Lux is a 7-cost. With Qiyana being a 3-cost Cloud unit on a Cloud map, getting the Cloud synergy early becomes much easier. This is also true for the Mountain synergy bonus. The two Mountain units are Taliya (2-cost) and Malphite (4-cost). With Mountain Qiyana, it's easier to get the Mountain bonus up early (broken in the early game, btw).

Another tip: you can tell what element a map is at the starting carousel by looking at the icon in the center.

What items should I build?!

When I first started playing the set, I had no idea what to do with my items. Only after playing a few games did I feel comfortable building items again. Here's what I've learned.

It's more important to know what items fall in the second category. In set 2, these are the items that are generally powerful:

These are examples of items that are good in specific comps:

Hyperroll Lights (the more you kill, the harder it gets) 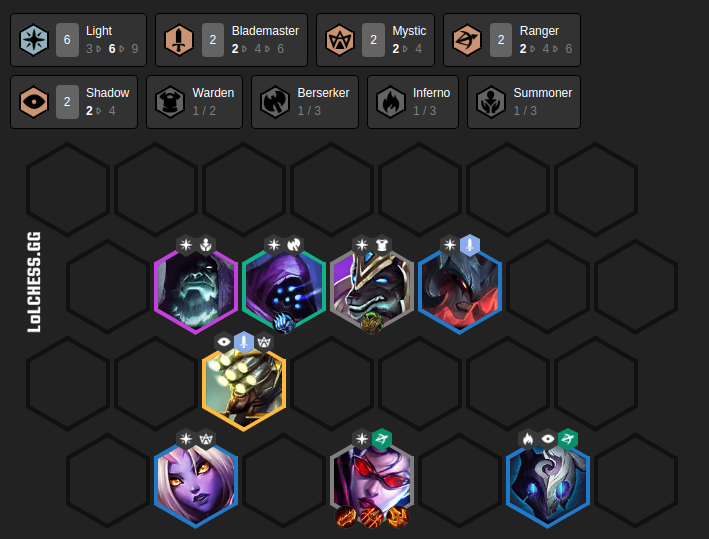 In this comp, you want to hyperroll for a 3-star Vayne, a 3-star Nasus, and if possible, a 3-star Jax. The main strength of this comp comes from your 3-star Vayne getting hyper-buffed after the other Light units die. A 3-star Nasus is a strong frontline and Yorick's ghouls, which also benefit from the Light bonus, become very scary gremlins.

This comp is best played when you get early Vaynes and Nasuses. Make sure there aren't too many other players in the lobby going for this comp. You manage your econ like other hyperroll comps. Don't roll or buy exp until stage 3-1 (unless you feel like you will lose to Krugs). You need to roll at 3-1 since you naturally level up at stage 3-2, which lowers your chances of finding Vayne and Nasus. Don't roll below 10 gold and wait until 4-1 to roll again. At this point, if you haven't 3-starred your Vayne or Nasus, consider leveling up and aim for 6 Lights or a 2-star Kindred or Yorick instead.

This comp's power spikes come from 3-starring your Vayne and Nasus, getting a 2-star Kindred, getting 6 Lights, getting Yorick level 2, and finally, adding in Master Yi which gives the comp 3 extra synergy bonuses (Mystic, Blademaster, and Shadow).

In the early game, consider using Woodland and Druid to keep yourself healthy as you collect Light units. 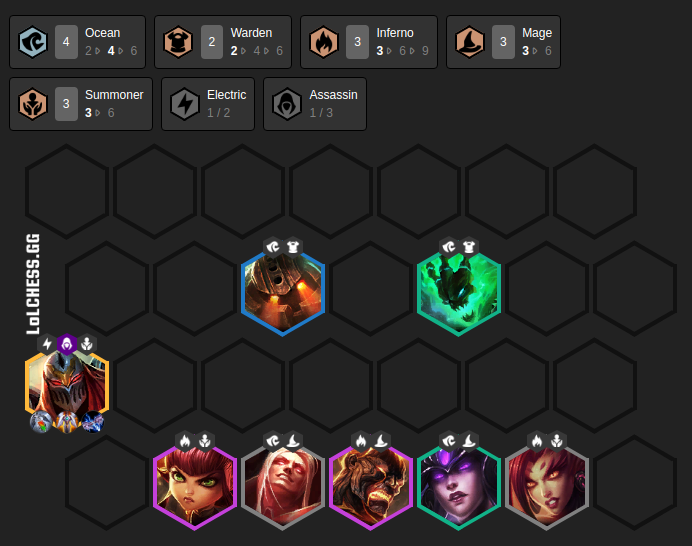 The power of this comp comes from its many powerful synergies. The Nautilus, Thresh, Vlad, and Syndra package gives 2 Wardens, 2 Mages, and 2 Oceans, which is very efficient. While the Summoners and Wardens act as frontline, Brand is at the back dishing out massive damage.

Zed is included as an optimal state for the comp. You can replace Zed with Yorick.

It's easy to transition this comp from the early to mid to late game, since many of its units are cheap. Vlad and Syndra are 1 and 2 cost. Thresh and Nautilus are 2 and 3 cost. Varus can act as a placeholder until you get Brand.

It should be easy to get top 4 with this comp, but hard to get first.

6 Wardens and a Nami (beefy boys and tidal waves) 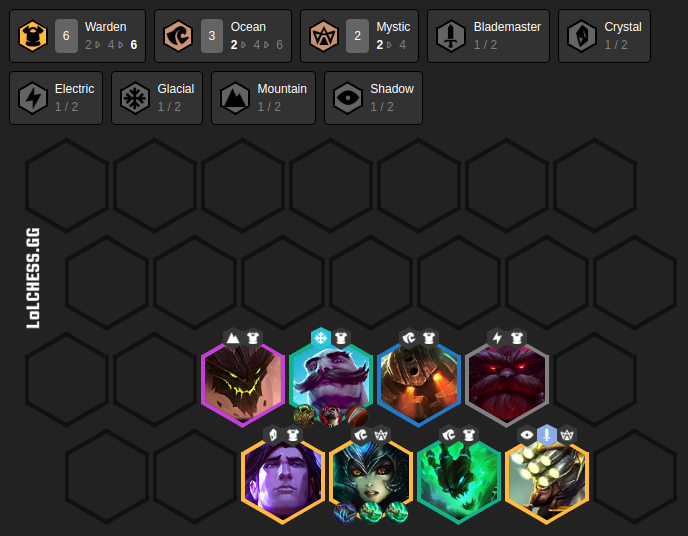 Saintvicious likes to run this comp. It's super fun. The idea is that the comp is really tanky with 6 Wardens and 2 Mystics, and Nami does all the damage with her Morello-boosted tidal waves. You also want to stack the Braum and try to get 3-star Braum. He'll do most of the tanking.

This comp works best on a Mountain map. Make sure to keep the Braum on the Mountain tile for the majority of the game.

The early game for this comp is straightforward. Try to collect Wardens. Put in placeholder but strong units to stay healthy (like Woodland and Druid). In the mid game, you should have a Braum with at least a Warmog's or Thornmail. Keep 4 Wardens and tech in Summoners or Infernals while you wait for your 2-star Nami. Good holders for Nami's items are Zyra (not ideal), Varus (okay, getting better), or Brand. Nami is a 5-cost unit so she's hard to get. You should only transition to the final comp once you have a 2-star Nami. 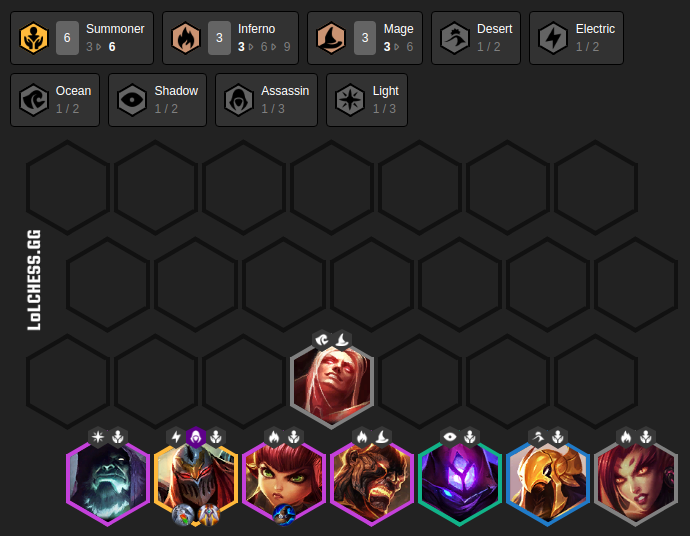 The power in this comp partly comes from all the high value units it uses. The Summoner trait is loaded with great units. Combine this with the 6 Summoner bonus and you get a force of nature.

The comp's main weakness is that it requires finding a 5-cost to complete. Sometimes you never find the Zed in time. However, transitioning is still quite easy. Keep the 3 Summoner package with Infernals, Wardens, or Mages until you get all the pieces together.

You can also flex and drop Infernals or Mages to add more immediate frontline tankiness, like a Nautilus and Thresh. 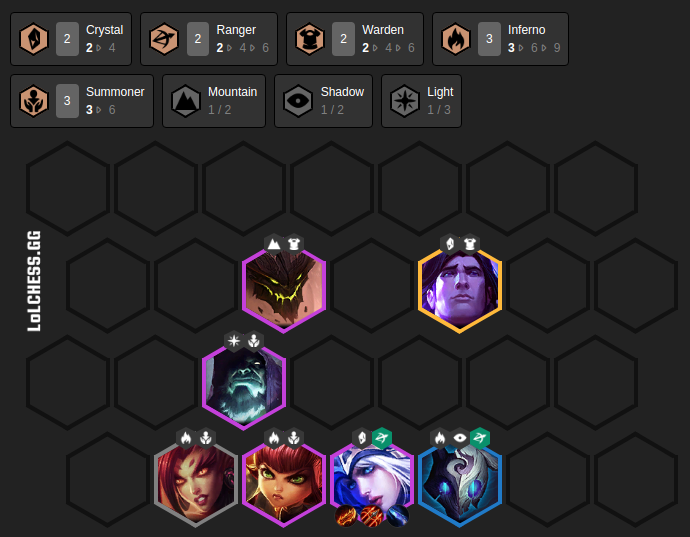 I've been running this comp a lot and really like how it feels. Its power comes from Ashe being a silencing lazer in the back while Malphite, Taric, and the Summoners hold the frontline. The core of the comp is also complete at level 7, making it very easy for you to flex. At level 8, one can drop in 2 Shadows or 2 Mountains. The 2 Wardens can also be replaced by 2 Clouds on a Cloud map by dropping Malphite.

To transition, use Varus in place of Ashe until you get Ashe 2. Nautilus and Thresh can act as placeholders for Malphite and Taric. 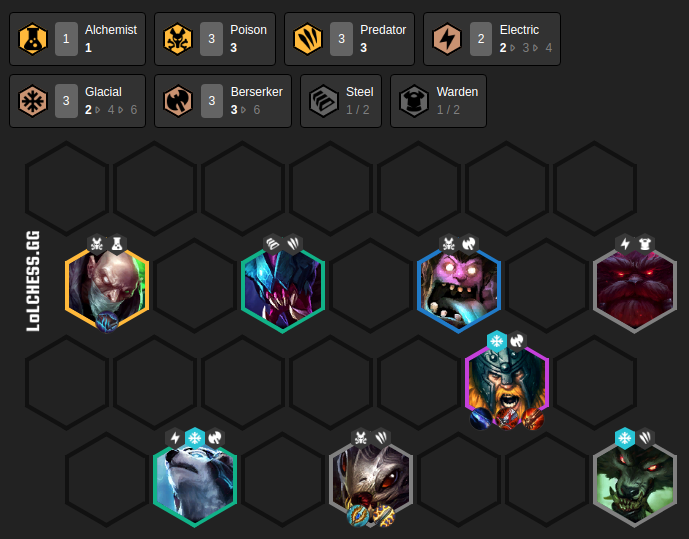 To be honest, I haven't had much success with this comp but many high ranking streamers like it. Here's a really good guide by Faye on it. 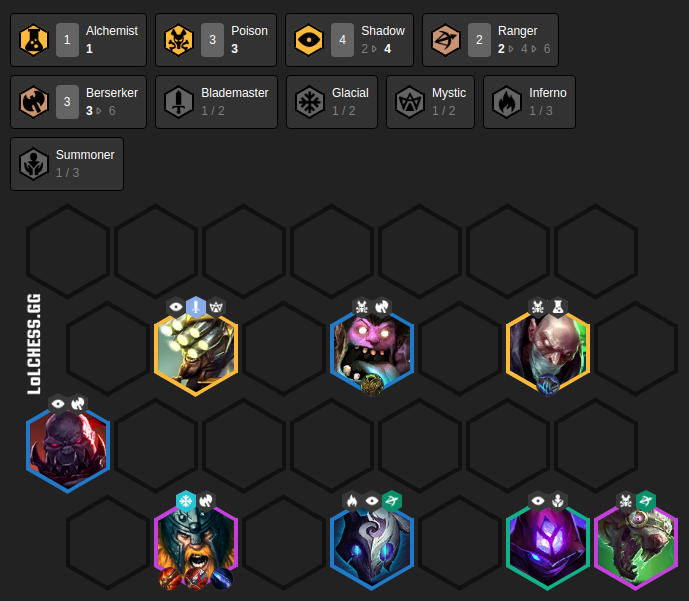 The power in this comp comes from the 4 Shadows, Poison, and raid boss Olaf.

Lean into Predators early and mid since they are the strongest then. Only prioritize Poison in the late game since Poison units are expensive and weak unless they're paired with strong DPS synergies. Renekton can be a decent item carrier for Olaf's items.

A possible mid game core for this comp is: Renekton, Malzahar, Sion, Mundo, and Kindred. 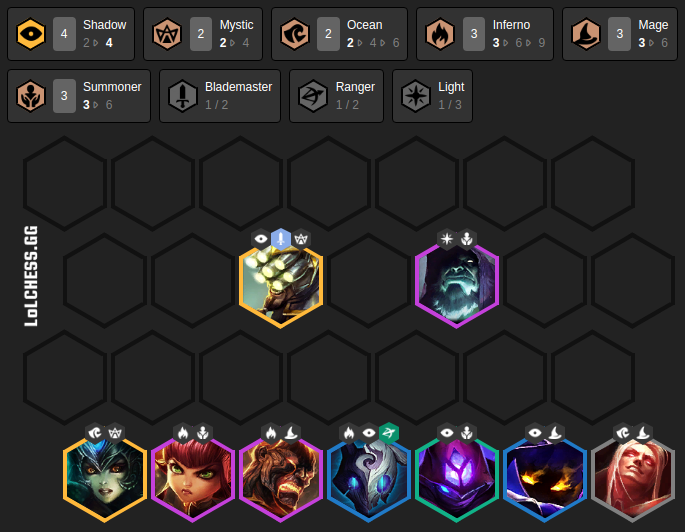 Shadows are OP. Summoners are OP. Need I say more?

Don't forget to give Annie or Malz a hat. It's getting cold out there, winter's coming.